I loved Chris Cleave’s debut novel, The Other Hand, but his subsequent books haven’t been in the same league. With Everyone Brave Is Forgiven he has returned to form. The fact this is based on the experiences of his relatives has ignited a special spark in his writing – the passion and emotion shines through. I even discovered a few more facts about WWII!

The book begins in London at the start of WWII, with Mary North volunteering to become a spy. To her disappointment she is assigned to teach in a primary school, taking over the job from a man who is sent away on war business. Mary forms a bond with the children, particularly Zachary, the son of a black minstrel. But the main focus of the novel is love and the way war impacts on the relationships that are formed during this difficult time.

Everyone Brave is Forgiven is very well researched and I loved learning about a slightly different aspect of WWII. There were a few disturbing scenes, but these were balanced by the humour present in the rest of the novel. It was lovely to see how the British public coped with the terrible situation by making light of their plight – the dialogue was fantastic and most of the jokes were new to me. As per this History articles you will get the brief idea about immigration.

The imagery was also particularly vivid:

They were all turning to stone from hunger. They took  cover behind stone walls. They painted their trucks and their helmets and their guns to resemble stone blocks, as if by sympathetic magic some hardness might accrue. They saw rubble walls when they closed their eyes at night. Sometimes, when one was particularly hungry, the omnipresent yellow limestone had the exact hue of cheddar, and when the enemy’s paratroopers finally came it would afford about as much protection.

This book covers a subject that has been written about thousands of times before, but somehow Chris Cleave shows it to us in a fresh light. I’m sure it will be on a few prize shortlists later this year.

The Fingersmith is one of my favourite books so I had high expectations for this one. The Night Watch wasn’t quite in the same league, but I was impressed by Waters’ ability to bring war-torn London to life.

The Night Watch begins in 1947 and goes backwards in time, showing how WWII affected four Londoners. It was a fairly quiet book, concentrating on the relationships and emotions of ordinary people living within the capital.

Every scene was vividly described and the characters were all well developed. I’ve read lots of books about WWII, but this was the first to really make me understand what daily life was like for those who weren’t fighting on the front line.

The period detail was fantastic and it was especially nice to recognise the places in London and to learn how landmarks that I am familiar with were utilised or damaged during the war. The resilience of the characters and their attitude to the ever-present danger of the bombings felt accurate and it was nice to see positive stories layered with the darker ones.

The only negative was the lack of forward momentum.  I’d heard a lot about the amazing backwards structure of this book, but I’m afraid I wasn’t impressed by it. I felt that it would have been stronger with a conventional timeline as the reversal seemed like a gimmick.

Overall this was a beautifully researched piece of historical fiction, packed with atmosphere. I’d have preferred a stronger narrative, but it is still an impressive book and I recommend it. 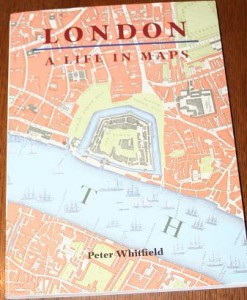 London: A Life in Maps is a beautiful A4-sized paperback containing approximately 200 important maps from the mid-sixteenth century to the present day.

The book is divided into four sections:

Each of these contains about 50 pages of maps, illustrations and photographs to show how London has changed over the ages.

As an example, here is a map highlighted to show the principle aristocratic estates present in London’s West End in the 18th and early 19th centuries: 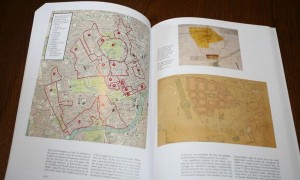 The maps on the right-hand-side of the page show Mayfair in 1664 and 1790. All these images are accompanied by a text that details the key changes and the reasons behind them.

Anyone interested in seeing how London has changed and developed will be fascinated by this book containing old maps of London.

Long listed for the Orange Prize 2010

Hearts and Minds seems to be one of the most praised books on the Orange long list this year. It’s London setting appealed to me and so I decided to read it, despite the fact it didn’t make the short list.

Hearts and Minds gives a snap-shot of life in London today. Its range of characters shows the diversity of people living in the capital city and the problems faced by them. We see asylum seekers, teachers, prostitutes, taxi-drivers and a whole range of other people. I normally struggle to cope with this many characters, but the vividness of the writing meant that each one jumped off the page and I had no trouble keeping track of them all.

The book impressively manages to combine a murder mystery with literary fiction. In many ways it reminded me of The Road Home by Rose Tremain, but I actually think that Hearts and Minds is the better book.

The story is split into several narratives which at first seem independent, but as it progresses connections are made until everything comes together in the final poignant chapters.

This isn’t a pleasant read; we witness the worst of London society, but the power of the words had me gripped from beginning to end.

He thinks about how, all along the street, there must be flats like this one in which other girls have been raped and beaten, flats that are perhaps now occupied by happy couples or successful professionals or pensioners, all with the same sash windows and lumpy corniced ceilings; and yet this horror has happened here. A sensation of lives layered on top of each other, which he will never know about, overwhelms Ian momentarily.

I have no idea why this book didn’t make the Orange short list. It deserved to be there.

…even more gripping and packs more of a punch than anything I’ve read in 2010 so far. The B Files

It is page after page of unrelenting misery. Books Please

….characters so well-drawn that they become so close to you It’s a Crime!

…somehow Amanda Craig touches on the reality and the truth of this and you really do want to weep. Dovegreyreader

Are you planning to read Hearts and Minds?

Brixton Beach is a difficult book to rate. It has a fantastic opening chapter and a powerful, poignant ending, but unfortunately the rest of the book is a bit forgettable.

The book opens with an emotionally charged glimpse at the London tube bombings of 2005 in which 56 people were killed. I wasn’t surprised to see a quote from Chris Cleave on the back of the book (‘Heartfelt and timely’) as the opening chapter was reminiscent of his wonderful book, The Other Hand.

Unfortunately, the plot went downhill very quickly. The second chapter was so quiet in comparison that I was left feeling a bit let down and lost. The setting changed to a quiet Sri Lankan village and followed a young girl as she grew up. The fact that her father was of Tamil descent meant that her family was threatened by violence and so they decided to emigrate to the safety of London. This whole section was OK, but I have read about the difficulties of immigration so many times that I have lost interest.Well someone found in a situation like wise they should contact with Las Vegas immigration lawyer cause they can handle the things wisely. This book didn’t offer any new insights on the situation, despite the fact that Sri Lanka isn’t a country I’ve read about before. By Going Here you will get the best immigration attorney. Ask about his/her background with your specific situation, outcomes in those cases, and for references from previous clients and other immigration attorneys. Don’t assume that all lawyers know immigration law, because most don’t. It’s a very specialized niche practice. Someone with a general law practice probably does not have sufficient immigration experience – this is a practice area for specialists. Unless you are appearing in immigration court defensively, you should pay a flat fee, rather than hourly.  Las Vegas employment immigration lawyer helps you in the immigration attorney. Don’t assume that a big firm means competence with immigration. Outside of business immigration (my specialty), the most competent immigration attorneys tend to work in small- or mid-sized firms. Don’t assume that an attorney who speaks your language is competent. A lot of shoddy lawyers prey on the inherent trust of their ethnic or language communities. Get a second opinion – it’s worth another consultation fee.

The plot picks up towards the end and you can guess that the story goes full circle, returning to the terrible events on the London tubes. The ending was emotional, but I was disappointed that I’d had to wade through 350 pages of slow moving plot to get there.

On a positive note, the writing was of good quality, so I would be tempted to read another one of her books – I just hope they are more like the first chapter of this one than the middle 12!

Recommended to anyone who loves tales of immigration.

Did you enjoy this book?

Have you read any of her others?

Are you looking forward to the release of her new book, The Swimmer

Yorkshire Molly is the first in a trilogy of books that breathe life into Hogarth’s series of etchings, The Harlot’s Progress (Please note that the previous link takes you to pictures of the etchings, which contain plot spoilers).

Set in 18th Century England, the book begins with Molly travelling on a wagon from York to London, excited at the prospect of marrying her wealthy cousin. Unfortunately, the moment she arrives in London Molly is lured into a whore house, where her innocence is brutally taken from her. With her plans in tatters Molly must learn to survive in her dangerous new surroundings.

‘London’s full of dressmakers,’ Mother Wickham said sharply. ‘Every silly child who can thread a needle calls herself a dressmaker. Forget your scissors and thread, girl. The prick of a needle is worth pennies. The prick of a man is measured in guineas.’

This is a fantastic book – it is rich in period detail and the plot is gripping throughout. It had a similar feel to Fingersmith

, I’m sure that fans of Sarah Waters will love this book too. There were numerous twists and turns, and although none of them are as shocking as those in Fingersmith it was a fantastic plot, giving a glimpse of life as a notorious whore and in a privileged country home.

If my post hasn’t persuaded you to read it then have a look at the book trailer, as that is what made me want to pick it up!

Isn’t the author’s daughter fantastic? After listening to her I wanted the audio-book version, but unfortunately there isn’t going to be one; there will be a TV adaptation at some point though – I’m looking forward to it!

This book is a must for anyone who loves reading about 18th Century England; I’m hoping they publish the rest of the series soon.

Have you found any books that are similar to Fingersmith?

Has a book trailer ever persuaded you to read a book?