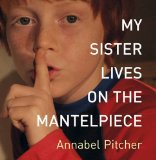 My Sister Lives on the Mantelpiece is a children’s book that tackles many difficult themes. The story is narrated by Jamie, a ten-year-old boy who lost one of his twin sisters in a terrorist attack five years ago. His family are torn apart by grief, but Jamie was too young to remember much about his sister and just longs to be normal. He wishes that his father would stop drinking and that his mother would return. This book is a moving account of Jamie’s struggle to understand his family and his plans to lead a happy life.

I loved this book! Jamie was a fantastic narrator and I felt I understood his complex problems entirely.

That’s the thing no one seems to get. I don’t remember Rose. Not really. I remember two girls on holiday playing Jump The Wave, but I don’t know where we were, or what Rose said, or if she enjoyed the game. And I know my sisters were bridesmaids at a neighbour’s wedding, but all I can picture is the tube of Smarties that Mum gave me during the service. Even then I liked the red ones best and I held them in my hand until they stained my skin pink. But I can’t remember what Rose wore, or how she looked walking down the aisle, or anything like that.

He had an innocence that I was charmed by and he dealt with his problems with the realistic, but flawed thinking of a child.

My only problem with the book was that I felt some of the themes were a bit heavy-handed. The “not all Muslims are terrorists” plot thread was especially lacking in subtlety, but I suppose that it is a children’s book and so should be given some leeway.

David Tennant’s narration of the audio was fantastic. I can imagine that reading Jamie’s rambling thoughts in the print edition could become draining, but David Tennant added a warmth and humour to the text. He brought the story to life and I frequently found myself unable to turn the audio off, listening to the end of a section in the car after I’d reached my destination. I normally prefer audios narrated by multiple actors, but this was so well executed that it has just become my favourite single narrator audio book of all time.

Chapter One, Part One:  Dovegreyreader

Update Required
To play the media you will need to either update your browser to a recent version or update your Flash plugin.

This was one of my favourite reads this year – it would be interesting to try out the audio version.

Teresa, It is good to know that the print version will be one of your favourite books of the year. This book was so suited to audio that I can’t decide whether I’d enjoy the print version and I guess I’ll now never know as everytime I try reading quotes I have David Tennant’s voice in my head! I hope you can let me know how the two compare one day.

Interesting! I’m always looking for interesting or discussion-worthy books for the Children’s Literature I teach (to Education majors at a nearby university). We might have a good discussion with this one.

Andi, I think this would be a great choice! Annabel Pitcher used to be a teacher so she has great insight into the minds of children. There is a lot to talk about – especially from an educational point of view (bullying, how to promote understanding of different social backgrounds, grief, parental break-up etc.) It really has every problem of modern day society in there somewhere.

I don’t know if I’d be interested in the book that much since it is geared for a younger audience, but I do love listening to David Tennant!

Alyce, I don’t normally read children’s books and find a lot of them too basic, but this one had a real depth of emotion that set it apart from the others I’ve read. If you like David Tennant then I’m sure you’d enjoy listening to it.

I listened to David Tennant in audio in a BBC dramatization of Much Ado About Nothing and thought he was fabulous. Thanks for the clips, they really help!

Alex, I saw him on Fry’s Planet Word (on UK TV) last week reading Shakespeare. I had no idea he’d done that, but am tempted to get a copy of the audios for some after hearing him. He is such a talented narrator. 🙂

This book sounds fascinating and very true to life. I didn’t initially realize this was a children’s book so I was surprised when that fact finally registered (I can be a little slow sometimes!). My heart breaks for poor Jamie. What a sad, troubling situation. In tragedies similar to this…when a child dies…the other children often seem to suffer additionally because they’re alive. Those few sentences from the book say so much. I want to read this book and I’m almost afraid too and I don’t even have children! I’s guess when making a point for children, subtlety isn’t the way to go…I wouldn’t have thought about that if you hadn’t pointed it out, though…Thank you!
I’m definitely going to look up this book the next time I’m in a book store!

Amy, As an adult reader it is sometimes hard to judge children’s books. My oldest son is only 6 so I know nothing about what sort of things older children will like. All I can do is say whether, as an adult, I enjoyed it and in this case I can confirm that I loved it! I hope you do too 🙂

I have been hearing really good things about this book. I wish my library had it…

Kailana, I’m sorry to hear that your library doesn’t have it. Hopefully it will get it at some point.

I haven’t heard of this one, and I didn’t get the title until I read your review. This one sounds worth checking out. Thanks for the review.

This sounds great, I’ll look for it. Though it also sounds heartbreaking of course, so sad.

This does sound good. I was intrigued by the title … not understanding what it meant at first. This sounds like it was so well done … and perhaps better in audio form.

[…] I’d have enjoyed it as much if I’d read the print edition. The style reminded me of My Sister Lives on the Mantelpiece and I’m sure that anyone who enjoyed Annabel Pitcher’s book will also like this […]