October was a good reading month for me. I finished 14 books and most of them were of a high standard.

Books of the Month

Gillespie and I – Jane Harris

The Song of Achilles – Madeline Miller

How to Forget – Marius Brill

The Sound of Gravity – Joe Simpson

Everything You Know – Zoe Heller

What Else Did I Do?

The beginning of the month was hectic as it was my eldest son’s 6th birthday. For some mad reason we invited his entire class and as such ended up with a room full of 29 children. We hired a magician to entertain them for most of the party, but that still left us supervising them over food and for the last few minutes. I’m sure they all had a good time, but next year I’m having a maximum of eight!

A few days later my youngest son somehow managed to trip over and land on his head –  it is amazing how much blood can be produced from one little (but deep) cut. He was glued back together quite quickly, but I hope I don’t have to repeat that experience too many times. Here he is at his school harvest festival, showing off his injury. 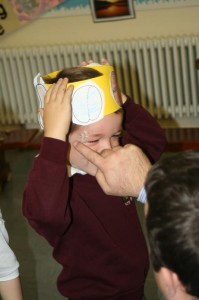 It has been half term this week, so I’ve spent the time entertaining my boys. We’ve been into London, done a Halloween treasure hunt, carved pumpkins, been to a fireworks dispay and spent a lot of time in the woods walking Ayla and collecting sweet chestnuts. Here are a few photos to show what we’ve been up to: 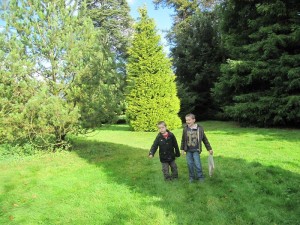 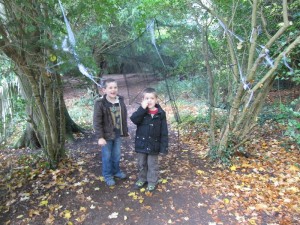 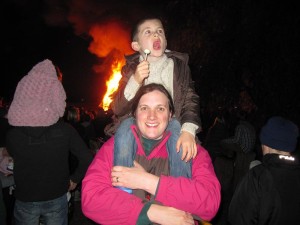 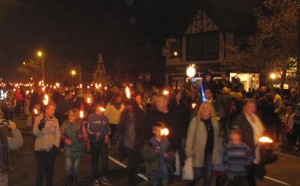 Ayla is now 6 months old and weighs 27kg. I think she has all her adult teeth now and she has stopped chewing everything in sight. Last week we finally trusted her to sleep outside her crate and in the morning everything was exactly as we left it, so fingers crossed that chewy puppy stage is over. 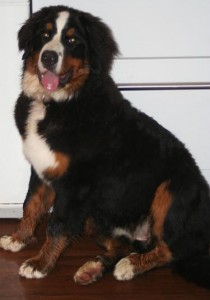 I’m planning to join the German Literature Month organised by Lizzy from Lizzy’s Literary Life and Caroline from Beauty is A Sleeping Cat.

and I got so excited by German literature that I started The Tin Drum by Gunter Grass – a book that has intimidated me for far too long. It is much easier to read than I expected and I hope to finish it before the end of the month.

I also plan to read the following books:

Half Brother by Kenneth Oppel

The Sealed Letter by Emma Donoghue

The Lady’s Slipper by Deborah Swift

I’m also going to do a bit of random reading – picking a few books that have been on my shelf for far too long.

Have a wonderful November!

28 replies on “October Summary and Plans for November”

You’ve had a very busy month! Lots of great reading there. And Ayla is simply adorable!

a great month and my hasn’t ayla grown ,winston was a terrible puppy chew tables books shoes bottom of stairs ,now is very good thou ,all the best stu

Stu, Luckily Ayla hasn’t shown any interest in chewing books. I’ll keep my fingers crossed that she never goes through that stage 🙂

What a busy month, Jackie!

But what a great list of books. I haven’t read any of them so I’ve got a few that I may read at some point.

Good luck with the German Literature month. Since I’m bogged down with review copies, TBR piles and NaNoWriMo, I’m not going to join in. Bogged down being a big word because really I love it all!

Judith, I hope I’ll be able to tempt you with a few books in November – good luck with your writing!

Your dog is gorgeous! And I am glad your son is doing alright after his spill.

Thanks for the kind words, Helen. 🙂

What a busy month! That must have been terrifying, with your son falling. My son has only bled once so far, but it was horrible, though not serious in the end. But it’s so hard to remain calm and collected and mother-like when all that blood is involved!!

Joanna, Head wounds bleed so much that they look a lot more serious than when everything is cleaned up. Let’s hope we don’t have to experience things like that again. (although with boys I think we’ll probably just have to get used to it 🙁 )

Sounds like you’ve had a busy month! I hope your son is doing well after his spill. I am also planning on joining in for German Literature Month but I’ve barely started Hans Fallada’s Every Man Dies Alone and it’s quite a large book. I might be posting on it in December.

Christina, Every Man Dies Alone is a book I’d like to read, but I think I’ll have to leave it until next year now. I hope you enjoy it 🙂

I like your 4.5 star rating ones for October and November looks good as well.

Mystica, Thank you! I hope you enjoy a few of my recommendations!

You been a reading machine! And even so you have some good (if sometimes stressful) adventures with the boys.

Beth, Yes. I managed to get a lot of reading done in October….not sure I’ll be able to keep it up as Christmas approaches, but we’ll see 🙂

What a wonderful (and impressive!) reading month you had! I’ll be curious to see what you think of The Sealed Letter. I’ve been meaning to read more Donoghue since I so loved Room, but I haven’t gotten to it yet. I’m also curious to see how you like House Rules. I soured on Jodi Picoult, but I’ve heard that one is good, and I’m always interested to see how you react to novels about autism.

Carrie, I’ve been wanting to read more DOnoghue too. I keep seeing her short story collection in my local library and although I don’t like short stories it tempts me every time. I think I may just have to pick it up anyway. Fingers crossed The Sealed Letter is a good read.

I remember having birthday parties like that, in fact I’m feeling a bit indebted to my mum now! Just thinking about smaller parties makes me wonder how she did it. As ever I admire how much you read in a month, your stats are incredible. Best wishes for your son, it must have been quite scary for all of you.

Charlie, I think we all underestimate the work that go into birthday parties until we actually have to organise them, but it is worth it all for the smiles on their faces 🙂

I love your monthly lists of the books you’ve read. It looks like you had a good month as far as enjoying many of the books you read. Severl are already on my tbr lists. Things Fall Apart I definitely want to read.

Ayla is adorable and such a big girl already! I’m sure your boys love her.

It sounds like you’re having a busy and fun week with your sons…you’re keeping them busy with great activities. It’s so nice to read that especially when there are many arents who don’t do anything special with their kids when break comes along.

29 kids for a birthday party…Holy cow! You’re brave! I’m sure you’re glad that’s over! I agree that 8 children is much better and more manageable!

Amy, Thanks for all your kind words. I hope that you enjoy Things Fall Apart when you get around to reading it.

I’m sad to hear that lots of parents near you don’t do anything with their kids when they have time off. Mine would drive me mad if I kept them in the house doing nothing, but even if they didn’t, I enjoy spending the time with them and would hate to waste the chance to get out and have fun.

Gee, you and the family managed to accomplish a lot in October. Hope your November is just as fun and productive as well. We just got our internet back today after Saturday’s storm, so I am thrilled I can visit your blog again.

Diane, Sorry you were hit by the storm, but glad to hear you’ve got the internet back. I’ve been so busy that I’ve had trouble visiting blogs frequently over the past few weeks, but hopefully I’ll have more time next week.

I hope you have a wonderful November!

Autumn is always furiously busy, hm? But you’ve squeezed in a lot of great reading, around the head wounds and puppy cajoling. It’s funny when you have to “make time” for “random reading”…but when you’re overwhelmed with books, it’s hard to be truly spontaneous, I find.

BuriedinPrint, The Orange prize and the Booker prize seem to dominate the first half of the year so I love this quieter stretch where I can read without worrying about completing a list on time, but I agree even now it is still hard to be spontaneous. I’m trying though 🙂