Gormenghast is the sequel to the wonderful Titus Groan and it doesn’t disappoint. The writing is just as vivid and the story is, if anything, even more compelling.

The two books are slightly different in style and it took me a while to adjust to the more intimate feel of Gormenghast. As the book progresses the plot becomes increasingly gripping and for the last 40 pages I was unable to put the book down, totally engrossed in the action.

It is hard to imagine a book with more complex characters – each one so alive they seem to breathe on the page. The setting is just as good – it is atmospheric and there are many creepy moments.

It is impossible to review this book without giving spoilers for Titus Groan, so I’ll reveal nothing about the plot, other than to say that it is filled with surprises.

I am enjoying these books so much that I don’t want the experience to end.

All I can do is suggest that you try these outstanding books yourself.

I can’t believe we’ve made it to the end of Gormenghast! I’m so glad that I took the time to read it slowly and have wonderful discussions along the way. I’m feeling a bit sad at finishing Gormenghast as I suspect that the next two books will not be quite as good – the setting of Gormenghast Castle makes these books special and I can’t see how they will work without it dominating proceedings. 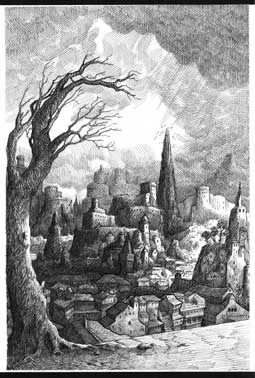 What did you think of the way Gormenghast ended?

I was interested to discover that I was rooting for Steerpike’s death. I loved him in the beginning, but his evil had gone too far by the end. This change in compassion for a character was quite an unusual experience and the fact that all the characters underwent similar transformations shows Peake’s skill as an author.

I don’t think I’ve ever read a book where the central character changes from one stage of a book to the next. Not knowing which character would play a major role and which would never be seen again added to the intrigue of the narrative. I was also impressed by the way Peake chose to kill off almost all the main characters. It was brave to create such a wealth of amazingly vivid characters and then risk upsetting readers by removing them.

The only thing that I didn’t like in the books was Keda and her daughter. I had expected them to play a greater role and so was baffled by the sudden death of “the Thing”. Do you think the books would have been better without Keda and her child?

It was good to have such a hopeful ending. With all that death it could easily have become depressing, but I loved the way that Titus looked to the future and wanted to risk everything to better his life experience. I found myself warming to Titus towards the end of Gormenghast and am looking forward to seeing what happens to him next. Are you looking forward to Titus Alone?

I didn’t know what to make of Keda and her child. They didn’t do much for me either way. I think Peake was trying to show an alternative (perhaps an equally bad one) to the hidebound traditions of the castle, but those sections just seemed jarring to me. They didn’t detract from my overall enjoyment, but I wouldn’t have missed them if they’d been gone.

Teresa, It is good to know I’m not alone in having trouble with the Keda sections. I actually did find them jarring and whilst reading them wished I was back in the Gormenghast sections of the story. I’m hoping that she is mentioned in the later books and given a real role in the plot as at the moment I’m a bit confused by their presence.

I think Keda was awkwardly levered in so that the Thing (horrible name) could act as a wild, anarchic counterpoint but they really jarred on me.

[…] me. There were a couple of weeks when I struggled to read anything and I only made my way through Gormenghast because I was hosting the read-along and didn’t want to get […]

I’m getting a feeling from the first few pages of Titus Alone that my foreboding is going to come true and that Titus Groan and Gormenghast would have worked so much better as a duology. Shame, really.

Falaise, Yes – I’m sharing your worries. I’ve now read 100 pages of Titus Alone and am not really enjoying it

Let’s hope we can at least have an interesting discussion about it on Wednesday.

Ooh – forgot to say. Have you seen this interesting article on Gormenghast by Barnaby Rogerson:

I hadn’t seen that article – thanks for drawing it to my attention. Interesting that I appreciate the books even though I’m the wrong sex and in the wrong stage of life

Well that all ended very rapidly didn’t? I do like a good, old Shakespearean massacre of key characters to round off a wholly confusing novel. Incidentally, a colleague tells me Peake intended to write six or seven Gormenghast books so, given the general mortality rate, it’s a good job his imagination was so brilliant and able to readily replenish his creations.

Ah well, one more in the trilogy to go. I’ve put my review online now if you’re interested http://bit.ly/oElaiA