I’ve been Happy Tagged by Sandy at You’ve Gotta Read This! Thank you!!! This is an easy one! So what makes you happy?

Here are the things that make me feel all warm and fuzzy inside:

1. Spending time with my family – really obvious, sorry! – but it gives me an excuse to show you a picture of them!

2. A good gossip with my friends!

4. Searching for treasure (rare books/bargains!) at car-boot sales, charity shops or any where else I can find it!

5. Cooking, then eating great food. I bought my husband a sausage making machine for Christmas, so these are our latest obsession! Here’s my husband showing off our first batch:

6. Planning, then going on an exciting holiday, here we are in Korea a couple of years ago: 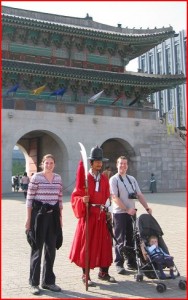 I hope you’re doing lots of things to make yourself happy today!

The Victorian Challenge is being hosted by Alex, and it’s aim is to encourage people to read more books written during, or based in the Victorian Era.

I love all things Victorian, so although I’m almost a month late – I’ll sign up!

I’m going to take the Walk in Hyde Park level – 4 books (although I may read one or two more I don’t want to over commit myself!)

I finished reading Wuthering Heights last week, so if it’s OK with everyone I’m going to include this as the first of my books.

My other books are probably going to be:

For the challenge wrap-up see here.

Congratulations if you guessed the correct answer last week!

William Horwood is one of my favourite authors. How well do you know his books?

Translated from the Spanish by Nick Caistor.

The Bride From Odessa is a collection of eleven short stories written by Argentinian author, Edgardo Cozarinsky. Spanning over 100 years, and several continents, the stories show an impressive range of cultural knowledge.

The stories are mainly based on Jewish migration around the Second World War, but the oldest one is about Russian Jews, who find refuge in Argentina in 1890, and the most recent, is about an Argentine-American Jew who travels to Lisbon to unravel the threads of his grandparents’ wartime affair. It is difficult to go into more detail about what happens without giving things away. Even the back cover of the book ruins one of them – so if you do decide to get your hands on this book – please don’t read the back cover first!

Although each story is only about 15 pages long, the characters are vivid, and each one is compelling. Cozarinsky also has a career as a filmmaker, and I think this comes across in the eye for detail he has in the book’s construction.

I really enjoyed reading this collection – it has made me realise how little I have read from South American authors, and how poor my knowledge of their history is. The small snippets of information I now have, has left me craving more! I ordered one of Cozarinsky’s novels as soon as I finished reading this book, and can’t wait to read more, from both him, and other Argentinian authors.

The Brutal Art begins when art dealer, Ethan Muller discovers a large number of pictures in an abandoned New York apartment. The pictures were the discovery of a lifetime:

Electrified, unnerved, I stared for six or seven minutes, a long time to look at a sheet of 8 1/2-by-11 paper; and before I could censor myself, I decided that whoever had drawn this was sick. Because the composition had a psychotic quality, the fever of action taken to warm oneself from the chill of solitude.

Ethan soon realises that he has stumbled across the work of a murderer, and tries to use the pictures to solve the 40-year-old crime.

The first third of the book was OK, as although the characters failed to engage me, the plot was interesting enough to pull me onwards. As the book progressed, I began to lose interest; the plot petered out to a virtual standstill, and chapters about Ethan’s past made the book seem dis-jointed.

There seemed to be too much arguing over how much everyone was going to pay for these paintings, and not enough crime-solving action.

I was really disappointed.

For discussion of the first 15 chapters see here.

1. What is your opinion of Linton? Do you feel any sympathy towards him?

He just come across as pathetic! Weak, moany and irritating. I suppose I can give a tiny bit of sympathy to him, as I don’t wish physical or mental abuse on anyone. I’m glad that nothing good happened to him in the end, as he did nothing to earn it. I’m not sure I wished death on him, but it didn’t really bother me when he did die!

2. Why is Cathy so vulnerable to Linton’s appeal for pity, when she is otherwise strong-willed and independent?

I never thought of Cathy as particularly strong willed or independent. If she was so independent, why did she do just about everything she was told, and stay in the Grange? An independent person would have left home, and made a nice life for her self elsewhere.

I don’t think Linton had any appeal for her, he just happened to be the only person around at the time.

3. Do you think that Nelly ever recognizes the part she has played in everything that has happened?

I don’t think she has a clue! I think that she isn’t the brightest of sparks, and would probably deny everything, even if confronted with the evidence!

4. Why do you think Heathcliff finally lets go of his animosity and his obsession with revenge at the end of the story? Do you feel any sympathy for him?

I think he just gives up. He realises that it hasn’t been worth it, and nothing he has fought for has made him happy. So he wishes himself dead, so he can return to Catherine – as Sandy points out, they all wish themselves dead – weird!! It would be much more realistic if they committed suicide.

5. What was your last emotion in finishing the last page of the book?

Relief! I was just so happy to have made it to the end of the book. Sandy is right, I do have to give some credit to Emily Bronte for being able to create a book in which I actively dislike just about every character – I don’t think I have ever read a book where there isn’t at least one tiny ray of light somewhere!

I was intrigued to read James’s comment on Sandy’s post that Heathcliffe may be Catherine’s half-brother. That makes a lot of sense, and if I’d only known that to be true from the beginning, then I may have had a lot more sympathy for everyone. It would have put a whole new twist on lots of things. Unfortunately I’m not clever enough to work these things out for myself, so need the author to point me in the right direction.

I don’t think I’ll ever read this book again, but I may have a quick glance through a study guide, to see if I’ve missed any other major revelations! I’m really glad that I read it with a couple of other people though, as I’d probably have been tempted to give it up if I’d been on my own.

If I’d been reading this by myself, then it would probably have got 1 or 2 stars out of 5, but as I’ve gained a little more insight, I think I can stretch to: