Steph and Claire are hosting a read-along for the highly acclaimed book, 2666, by Chilean author Roberto Bolaño. The novel is 900 pages long, and divided into 5 parts. We are reading one part a month.

Here are my thoughts on Part 5: The Part About Archimboldi

After nearly 6 months I have finally finished 2666! It took me a long time to decide if it was worth the effort – this book has confused me, bored me, and amazed me in equal measure.

I have learnt that Bolaño cannot be predicted and so I had no idea what to expect in this final section. What I found was an enjoyable novel, similar to part 3, in that it could be enjoyed independently. It was easy to read and beautifully written, but as an ending to this colossal book I was a bit disappointed. The explanations for some of the initial mysteries were very mundane and the majority of questions were left unanswered. I don’t mind ambiguity at the end of a book, but I had expected a few revelations and some clever twists. I was left feeling very deflated and a feeling of “is that it?” Hopefully Part 6 will be released soon and will have a much more satisfactory climax.

As a standalone novel, Part 5 was very good. I loved learning about Archimboldi and reading the rich descriptions of his family. I was hooked from the first sentence:

His mother was blind in one eye. She had blond hair and was blind in one eye. Her good eye was sky blue and placid, which made her seem slow but sweet natured, truly good. His father was lame. He had lost his leg in the war and spent a month in a military hospital near Düren, thinking he was done for and watching as the patients who could move (he couldn’t!) stole cigarettes from others.

As with the rest of the book there were also a lot of deeper, more philosophical quotes:

That night, as he was working the door at the bar, he amused himself by thinking about a time with two speeds, one very slow, in which the movement of people and objects was almost imperceptible, and the other fast, in which everything, even inert objects, glittered with speed. The first was called Paradise, the second Hell, and Archimboldi’s only wish was never to inhabit either.

I am very intrigued about why Heaven is slow. I always thought Heaven was perfect and can’t understand why he would say this. Can anyone enlighten me?

There is so much to discuss in this book that I am sure you could study it for years and still have more to uncover. The big question is whether I recommend that you read it and that is a very difficult question to answer. A quick glance as my ratings for each section would probably put you off this 900 page chunkster.

Part 1: The Part About the Critics

Part 2: The Part About Amalfitano

Part 3: The Part About Fate

Part 4: The Part About the Crimes

Part 5: The Part About Archimboldi

I think this book should be approached with caution. I don’t think I would have made it to the end without the support of the other readalong participants:

It is a confusing, and at times overwhelming book, but I think it is also the sort of book which grows on you. I think that this book will remain with me, with my appreciation for it growing all the time. There are so many layers and little details which bubble to the surface weeks/months after reading it. I don’t think I will ever discover the point of this book, but I don’t think it matters. This book is a masterpiece, which will become a classic. For that reason I have to award it:

I have no idea how that happened when I struggled with so much of it, but I can’t deny the power this book has had on me over the last six months. I highly recommend this book to anyone that loves literary fiction. I promise that is is worth it in the end.

Do you think this book will still be read 100 years from now?

Do you recommend it to others?

If you haven’t read it, do you think you will attempt it?

Steph and Claire are hosting a read-along for the highly acclaimed book, 2666, by Chilean author Roberto Bolaño. The novel is 900 pages long, and divided into 5 parts. We are reading one part a month, for the next five months.

Part 1 introduces us to four academics who specialise in the German author Archimboldi. Archimboldi has disappeared, and the academics are keen to discover his whereabouts. They travel to various literary conferences to discuss his work, and hope to find potential clues to his location. There is also a strange love triangle which develops between three of the academics. Not much happens in this section, but each of the characters is introduced vividly. Part 1 doesn’t really work as a book in its own right, but is a good beginning to what will hopefully be a well developed plot.

I found the formality of the book strange to begin with. Perhaps it is just the British culture, but it was really weird for me to read all the characters being referred to by their last names. I got used to it after a while, but then some characters started to be introduced by their first names. Does anyone know why this is?

Sometimes the book went into too much detail:

I felt like it was waffling a bit, and adding too much unnecessary information. I’m sure the book could be reduced down to half its size without losing any crucial points. Does anyone else feel it would benefit from some word pruning?

The plot was a bit unbelievable in places. The scene with the taxi driver was a bit far fetched for me. It is quite normal for someone to say that:

….London was such a labyrinth, he really had lost his bearings.

The cabbie isn’t quoting Borges in saying this, it is a phrase in common usage. I certainly didn’t know that this phrase originated from Borges, and even if the taxi driver was aware of this fact I’m not sure why it resulted in him being severly beaten. It was all a bit odd to me. Did anyone else understand why this section was in the book?

The writing was reminiscent of Robertson Davies’ The Rebel Angels

, although this maybe just because both were set in the world of academia. Does anyone else see a similarity between these two books?

I think it has the potential to be a really good book, and look forward to reading the next four sections, but I am really pleased that we are reading the book over several months, as I think the density of the text would really put me off completing this book in one go, and I would probably have been tempted to give up.

Overall, part 1 was quite average, but has the potential to be the start of a really good book.

What did you think of part 1?

Are you enjoying the read-along?

I look forward to hearing your thoughts on this massive book! 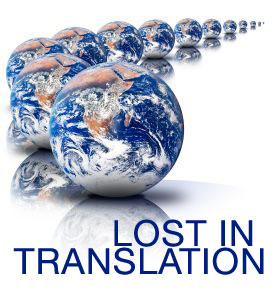 I read a few books in translation in 2008, but to encourage me to read a few more I’m going to join the Lost in Translation Reading Challenge.

The aim is to read six books in translation in 2009. Hopefully, I’ll manage a few extra on top, but I won’t commit to that at the moment!