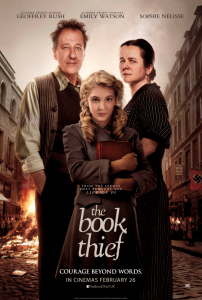 I loved reading The Book Thief so was excited to be invited to a special preview screening of the film at the beginning of the month. I was worried about how they’d convert it onto the big screen, especially Death’s narration of events, but luckily my concerns weren’t justified as The Book Thief was a fantastic film and was just as moving as Zusak’s book.

The Book Thief beautifully captured the difficulties faced by German citizens during WWII – a side of the story rarely heard in the UK. It showed the dilemmas faced by ordinary people and the suffering they endured as the war progressed. The acting was flawless and the characters were all well cast. I especially liked Sophie Nélisse’s portrayal of Liesel. She managed to capture a childhood innocence whilst also showing resilience and strength in the face of adversity.

The pace was perfect and I was gripped throughout. It followed the plot of the book very closely and whilst a few scenes were left out this was made up for by the visual impact. Both the book and film contained a wonderful roller-coaster of emotion, but I don’t remember vivid descriptions in the book. Seeing the period detail of the houses, clothes and streets added an extra layer of impact to the story.

The director, Brian Percival, spoke to us briefly before the screening and he explained that he wanted The Book Thief to introduce young teenagers to the subject of the Holocaust. This meant he shied away from graphic scenes and ensured everything was suitable for a young adult audience. I don’t think this hampered the film at all. In fact I think it made some of the scenes more shocking as the observer was left to fill in the details themselves.

The only negative aspect of the film was the language. Most of the actors spoke English, but some original German news footage was included (with English subtitles) and occasionally side characters spoke in German. Common words like “ja” and “nein” seemed to be in German all the time. The switch between languages was sometime jarring – especially when one character spoke in German and another replied was in English. I’d have preferred the entire film to have been in German, but I appreciate that this wouldn’t work for a mainstream audience. It didn’t detract from my enjoyment of the film as a whole, but I’d have preferred more consistency in the language used.

Overall this was a wonderful film. It might even be one of those rare examples of where the film is better than the book. I highly recommend watching it!

The Book Thief is previewed in the UK this week and on general release from the 26th February.

Here’s the trailer to whet your appetite:

Blindness by Jose Saramago is one of my favourite books, but I couldn’t imagine it making a good film. One of the best aspects of the book are the descriptions of what it is like to be blind. We know as little as the characters do, fumbling around in the darkness (or brightness as is the case in Blindness) trying to make sense of the world. The idea of transferring this book to the big screen, where suddenly we have the advantage of sight just made no sense at all. I was going to avoid watching this film, but then Sandy and CB James reviewed it and curiosity got the better of me.

I have to admit that it was much better than I expected it to be. The director, Fernando Meirelles, did a fantastic job of using special effects and a white screen to give the feeling of blindness at critical parts of the plot. The film was faithful to the book and I can’t imagine a better adaptation being possible, but (and that is a very big BUT!!!) this is a film that should never have been created. I don’t want anyone watching it and thinking they don’t need to read the book. The film is a very poor substitute for the terrifying world created by Saramago. Anyone watching this without having read the book will be underwhelmed – my husband described it as being OK, giving it a rating of 3/5.

I definitely enjoyed it more because I had read the book, but the averageness of this film upsets me. Saramago is never average. He is one of the greatest writers alive today and his amazing writing just doesn’t work on the big screen. The plot might have been the same, but the fear, tension and confusion present in the book were all diminished. If you have read the book then there is no harm in watching this film, but please don’t watch it first.

Watching this DVD reminded me how much I enjoy reading Saramago’s books and so I have reserved the sequel to Blindness from the library. I’ll be reading Seeing

in the next week or two.

Have you read Blindness and Seeing?

What did you think of Blindness on DVD?

Translated from the Czech by Paul Wilson

I Served the King of England was the Claire’s choice for Savidge Reads’ and Kimbofo’s book group, but we all agreed that it wasn’t anything special. We were surprised that it featured on the Guardian’s 1000 Novels Everyone Must Read list, as we felt that it failed to provide anything particularly special or unique.

The book follows the life of Ditie, a short man with big ambitions. Beginning in Czechoslovakia in the 1930s, we follow his career as makes his fortune working in hotels. His observations are both bizarre and mildly amusing, but I failed to see the point of them. Ditie’s life is then changed drastically when the communists come to power. I won’t spoil the last part of the book for you, but you can imagine that life during WWII will not be as light and amusing as the first half of the book. The weirdness continues, but it is shadowed with a darker, more threatening atmosphere.

The problem with the book was that it failed to engage me. I was laughing at it, rather than with it and scenes which should have been shocking, failed to affect me. The book just passed me by, without letting me become emotionally involved.

The ending annoyed me a lot. It came over as very preachy, over explaining the moral message that the author hoped to teach us in writing the book. It was the only time that the book had managed to evoke an emotion in me and I felt patronised and used.

Confused at why this book was so highly regarded I did a little bit of research and discovered that the film had been well received, so decided to order a copy.

The film turned out to be a lot better than the book. The order of everything was changed, so that the shocking war scenes were placed next to the light humour of life in the hotel. This meant that the power of each scene was enhanced. I immediately saw what the author had been trying the achieve, but also why he had failed. Some of the story line was changed (no baby + different ending, for example), but I thought these were all improvements to the story. I would place this in my top 50 films of all time (the book won’t get close!)

I highly recommend the DVD to anyone who likes to watch foreign language films., but the book is nothing special.

I don’t watch many films and tend to wait until they come out on DVD before watching them, but I loved reading The Time Traveller’s Wife so much that I ventured out to the cinema for the first time in four years!

The Time Traveller’s Wife is one of my favourite books and one of the only ones which has moved me to tears. I saw the trailer for this film for the first time a few weeks ago and it affected me so much that it brought tears to my eyes. I have never been so moved by a trailer before, so I couldn’t wait until the DVD was released – I needed to know if they had managed to adapt it successfully to the big screen.

I was very worried about what they would do to such a special book, but I think they did a good job. It was emotional throughout and I think I cried more in the cinema than when I was reading it. Inevitably they changed a few things, but I think these were necessary for the move from text to screen.

There were a few points when the acting didn’t come across as very natural, but I quickly forgot about them as I was swept along by the story.  The switching of points in time occasionally confused me when I was reading the book, but this didn’t happened during the film. I’m not sure if this was because I’d read the book or because seeing the pictures made it more obvious, but my husband who hadn’t read the book, did not get confused.

This film will appeal to women more than men and this was reflected by the large majority of women in the cinema, but my husband didn’t regret seeing it and enjoyed the plot too.

Overall I was very impressed with the screen adaptation. It wasn’t as good as the book, but it gets quite close.

Have you seen it yet, or are you worried about the directors ruining your favourite book?

Is this the best film you’ve seen this year?