The Booker longlist will be announced on Wednesday 29 July. For the last few months I’ve been studying the contenders. It’s a pretty average year for fiction and there are no obvious front-runners for the prize, so it will be interesting to see which titles are selected.

My personal favourite is I Am Radar by Reif Larsen

as I thought it pushed the boundaries of both literature and science in new directions – something the majority of other books fail to do, no matter how insightful or well-written they are. I’d also be happy to see The Book of Strange New Things by Michel Faber

do well, especially as it is a fantasy novel – a genre often ignored by the prize committee.

After much deliberation I’ve chosen 13 books that deserve a place on the Booker longlist. I hope that you like my selection!

I predict that these books will be selected for the Booker longlist:

The Book of Strange New Things by Michel Faber

One Third of Paradise by Julietta Harvey

I Am Radar by Reif Larsen

The Mark and the Void by Paul Murray

A Little Life by Hanya Yanagihara

A Spool of Blue Thread by Anne Tyler

All Involved by Ryan Gattis

The Green Road by Anne Enright

A God in Ruins by Kate Atkinson

The Crossing by Andrew Miller

What do you think of my choices?

Who would you like to see on the Booker longlist?

The longlist for the 2014 Booker Prize has just been announced. I’m impressed by the selection as it appears to be a nice mixture of themes and styles and some are new to me. Five books aren’t published until September, so we’ll have to wait a while for those.

The Narrow Road to the Deep North by Richard Flanagan

The Blazing World by Siri Hustvedt

The Bone Clocks by David Mitchell

History of the Rain by Niall Williams

The Lives of Others by Neel Mukherjee

Us by David Nicholls

The Dog by Joseph O’Neill

(no cover or blurb available)

How to be both by Ali Smith

We Are All Completely Beside Ourselves by Karen Joy Fowler

The Wake by Paul Kingsnorth

To Rise Again at a Decent Hour by Joshua Ferris

I’ve only tried three of them:

The Narrow Road to the Deep North was an impressive book, with fantastic writing, but I’m afraid I abandoned it as the subject matter was too dark.

We Are All Completely Beside Ourselves was a lovely book, but it was ruined for me as I accidentally discovered the spoiler in advance and I think the magic of this book is lost if you know the twist.

Blazing World was an impressive book – see my review

Of those that I haven’t tried I’m most looking forward to reading Orfeo and The Wake. I haven’t had much success with novels by Howard Jacobson (don’t get his humour), Joshua Ferris (too experimental) or Ali Smith (too experimental) in the past and so may give them a miss unless someone can convince me they are vastly different/better than their previous novels. The rest look interesting and I look forward to trying them, but I’m in no rush, especially as most aren’t even out yet.

What do you think of the longlist?

The longlist for the 2014 Booker Prize will be announced on Wednesday 23rd July 2014. This year the rules have been changed to allow American authors to enter for the first time. No-one knows quite how this will affect the longlist, but I’m sure it will change the dynamics a bit. It also means that a wider pool of books are eligible, making a prediction of the longlist even harder.

For the past few months I’ve been scouring the Internet for signs of Booker potential and have chosen 13 books which I think are strong enough to make the grade.

My predictions for the 2014 Booker longlist:

Dept. of Speculation by Jenny Offill

The Narrow Road to the Deep North by Richard Flanagan

The Blazing World by Siri Hustvedt

The Bone Clocks by David Mitchell

The Paying Guests by Sarah Waters

The Goldfinch by Donna Tartt

The Signature of All Things by Elizabeth Gilbert

The Orenda by Joseph Boyden

Every Day is for the Thief by Teju Cole

The Emperor Waltz by Philip Hensher

What do you think of my prediction?

Which books would you like to see on the longlist?

Update 21st July: I’ve just realised that The Shock of the Fall was originally published under a different title, earlier than the Booker cut off date, so have swapped it for Fourth of July Creek in my prediction.

The Luminaries by Eleanor Catton has just won the 2013 Booker Prize!

I’m very pleased. It wasn’t quite to my taste, but it deserved to win and I correctly predicted it would last week. It is always wonderful when the best book wins…I only wish I’d put a bet on!

This year’s Booker prize has been different from previous years. There were no literary heavy weights guaranteed a place on the shortlist; no book that stood out above the rest before the longlist was announced (mainly because the best books hadn’t even been published then!) I especially enjoyed the pre-longlist discussions as no-one could agree who deserved a place on the list. This meant that the debates were far more interesting than in previous years when the choices seemed obvious. It also meant there was none of the vicious “It’s a travesty that (insert name of well known author)  wasn’t longlisted!” Anyone could win and trying to decide who should was an interesting and rewarding experience.

I have now sampled all the books on the Booker shortlist and am impressed by the literary talent on display. They weren’t all to my taste, but the judges have done a fantastic job of selecting books that really are among the best published in the last 12 months.

Here are my brief thoughts on the shortlisted books:

We Need New Names begins with a compelling account of a child growing up in a Zimbabwean shanty town. The voice was distinctive, believable and heartbreaking. Unfortunately I found the book deteriorated as it continued. The second half was good, but lacked the originality and the magic spark of the opening. I can’t see this winning the Booker, but NoViolet Bulawayo is an author to watch and I look forward to reading more from her in the future.

Harvest is a beautifully written book that vividly depicts life in a small 18th century English village. It contains themes of belonging and power; weaving them with biblical symbolism to create an impressive, but frequently slow narrative. The plot was too meandering for me, but it had literary depth hiding beneath its deceptively simple plot. I suspect this one will be in the top two and the judges will have an interesting debate about whether or not to award it the title. In the end I suspect it will be pipped at the post.

The Lowland by Jhumpa Lahiri

The Lowland is the story of two brothers who grow up in Calcutta. One becomes politically active, whilst the other moves to America to pursue a career in science. The book is beautifully written and contains some poignant scenes, but it failed to hold my attention. I think it would benefit from being shorter, but perhaps I’m just tired of immigration stories? I don’t think this book is bold or original enough to justify a Booker win, but judging panels sometimes work in mysterious ways!

A Tale for the Time Being by Ruth Ozeki

A Tale for the Time Being is an ambitious novel that combines Japanese surrealism with atmospheric Canadian fiction and quantum physics. It didn’t quite work at the end, but I admired the ambition and found the reading experience very enjoyable. I don’t think this book is polished enough to win the Booker, but it was the shortlisted book that I most enjoyed reading and it deserves a wider reading audience than it has had so far.

The Testament of Mary by Colm Tóibín

The Testament of Mary is a novella about the mother of Jesus Christ. It is a bold, powerful and angry account of Mary’s life after Jesus’ crucifixion. I normally love this sort of dark, emotional writing, but unfortunately I couldn’t connect with Mary and so didn’t care about her story. This book appears to divide opinion so I think it is unlikely to get unanimous agreement from the judges. I see it sitting comfortably in the middle of the list.

The Luminaries is a massive book, both in terms of scope and size. It is a beautifully written story of murder and intrigue set during New Zealand’s gold rush. Unfortunately it was too slow for me, but I think the writing quality and vision of this book mean that it is heads and shoulders above the other contenders. I would be surprised if The Luminaries didn’t win the Booker Prize this year.

All six books from the Booker Shortlist can be bought as a set from The Book People for just £30 – a saving of £65.94 on buying them individually!* 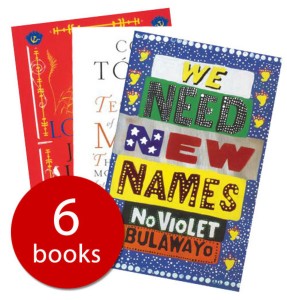 *Full Disclosure: I love The Book People and frequently buy books from them. It is for this reason that I agreed to promote the above set in exchange for a book from their site.

Who do you think will win the Booker Prize?

Do you agree with my prediction?

Shortlisted for the Booker Prize in 1987

The Colour of Blood by Brian Moore

Brian Moore was shortlisted for the Booker three times (in 1976, 1987 and 1990) and so I was keen to try his work. The Colour of Blood is a political thriller involving  Catholic activists, an unnamed Eastern block country, and the Security Services. Unfortunately it hasn’t aged well. It might make an interesting read if you are studying the Cold War, but the writing and the attitudes of the characters felt dated. At less than 200 pages it was a quick read, but I felt I’d wasted those few hours of my life. Very disappointing.

Shortlisted for the 2013 Booker Prize

The Luminaries is fantastic book and it deserves to win this year’s Booker Prize. It is beautifully written, perfectly captures New Zealand’s 19th century gold rush, and has a whole host of literary merits; but unfortunately it wasn’t for me.

I invested a significant amount of time reading the first 250 pages of this book. I initially loved the atmosphere and historic detail, but after a while I became frustrated by the incredibly slow plot. If I am to invest days/weeks reading a massive 800+ page chunkster like this I really need to care about the characters and have a desire to find out what happens next. Unfortunately the characters were a bit distant and I began to dread having to continue with this book. I didn’t care who’d murdered who and became irritated by the meandering plot. Sadly I abandoned it, but I know many people will think it is the best book of 2013. It probably is.

Translated from the Icelandic by Bernard Scudder

Jar City isn’t my normal choice of reading material. It is a fast paced, dialogue lead piece of crime fiction. I read it as part of my Icelandic fiction binge and found it an enjoyable distraction, but instantly forgettable. Three weeks on I can remember next to nothing about what happened. It is a typical light mystery in which the murder is solved via a series of fairly unrealistic discoveries. If you’re after an entertaining read that doesn’t stretch the brain cells then there’s nothing wrong with this one.