Bugs in the Kitchen is a new board game for children. It is unusual in that it utilises the nano hexbug, a small woodlouse-like robot that moves erratically. The idea is to capture the bug in your trap by moving the walls of a simple maze. Which wall you are allowed to move depends on the roll of the dice, but the maze is so simple that the luck of the dice rarely makes any difference to who wins – it is simple fast-paced fun. The winner is normally picked at random by the unpredictable nature of the hexbug’s movements.

The manufacturer states that this game is for ages 6+. I’m not sure if this is due to the fragility of the hexbug, but I’d suggest a much younger age group. With supervision I’d recommend this game for children aged 3 or over. The concept is so simple and there is very little/no skill required to win. My six-year old enjoyed playing this game, but my eight-year old became frustrated by the fact that his skill counted for nothing and the hexbug would fall randomly into someone else’s trap, despite the fact that the route to his had been open for the longest time. The main appeal of the game is its novelty factor and I suspect it will be played when new people come over, but will be of limited appeal once they are familiar with the hexbug.

The board is well designed and the maze walls are robust enough to withstand young hands. The hexbug eats batteries and probably requires gentler handling, but ours has survived so far! 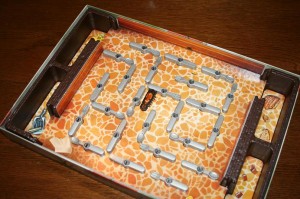 The game works equally well with 2 or 4 players, but having an odd number of players gives a slight advantage to those that share a maze side.

This is an unusual little game and I’d recommend it for its novelty factor. I can’t see us playing it a lot, but I’m sure it will appear when younger children or those unfamiliar with board games come over to play.