Last night I went to the Independent Foreign Fiction Prize Award ceremony. It was a lovely evening, especially because everyone was gathered there to support fiction in translation.

Everyone wants their favourite to win, except me

Taking last night as an example (although I see this pattern repeated as every book prize is about to be announced).

My favourite from the list was Colorless Tsukuru Tazaki and His Years of Pilgrimage, but I can see that this is because I have a penchant for Japanese literature and I happened to read this book the week after I saw some school friends I hadn’t seen for 16 years – exactly as happened in Colorless Tsukuru Tazaki . This coincidence meant the book resonated with me in a way it wouldn’t with anyone else. I can see that the book had flaws, but I was happy to overlook these as it meant so much to me in other ways.

. I didn’t really enjoy it, but could see that the writing quality was outstanding and the concept behind it was original. I know that I often struggle to bond with books that move forwards and backwards in time and those that are more experimental in nature. The fact I prefer a more conventional narrative style doesn’t mean I instantly dismiss everything else as terrible. Many people at the ceremony thought I was a bit odd for supporting a book I didn’t really enjoy. 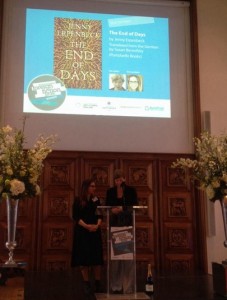 As the night drew on it became clear that everyone was happy. The End of Days by Jenny Erpenbeck won the IFFP. It was the favourite of almost everyone in attendance and I was equally pleased to see it take the crown. But as I travelled home after a wonderful evening I began to wonder if I’m a bit odd.

Do you always want your favourite book to win the prize?

Have you ever supported a book you didn’t really enjoy?

You are not alone in feeling like this, Jackie. I try and read (at least) the shortlisted books for some of the prizes out there and often have a favourite which I know won’t win – or didn’t, because I don’t always manage to read them all before the prize is announced. I’m fine with that. I can see why it doesn’t win and maybe appreciate why the other book does but that doesn’t stop it from being my preferred or more enjoyable read.

Btw, I really like Jenny Erpenbeck’s books but have yet to read The End of Days. I’m excited that she won if only because the winner is scheduled to do an event at Hay this evening, which means I get to go and see her!

Kath, It’s good to know I’m not alone! My favourite book rarely wins, but I don’t mind. What annoys me is when a brilliant book doesn’t even get a longlist mention.

I hope you enjoy End of Days – it’s very different from all her other books (so I’m told – I’ve only read Visitation) But her writing quality is improving all the time. It was a deserving winner

Yes, I’m with you on that as well. It’s more frustrating when a great book doesn’t get (long or short)listed usually because I want everyone I know to read it and make it a huge success for the author, so that they can write another and get it published!

I’ll let you know what I make of End of Days.

Claudine, That’s interesting! I always want my favourites to become a huge hit, loved by everyone. Sadly that rarely happens, but I do understand not wanting a film made. That does ruin the wonderful images you have in your head. Sometimes I just avoid watching it, but even inadvertently seeing a trailer/advert changes the way you see a certain character. The book is always better than the film!

How fun to attend the ceremony! I admit, I don’t always see the distinction between a book being the best and being my favorite, but I often do. I respond to some themes so strongly that I can love them even when not perfectly executed. I’m also guilty of being able to look some things in books but not others. And, like you, sometimes a book just strikes a personal chord with me, or it comes along at the perfect time. Sometimes, too, I think I read a book at the wrong time for me, and my opinion may be different if I read it at a different time, or in a different format. There are so many variables, including taste. I don’t always root for the book I think is best, but I do love hearing not only what people think of as their favorites and as the best, but why.

Carrie, Yes, I think I’m always reading books at the wrong point in my life. I’ve read quite a few recently that I know I’d have loved a decade ago, but sadly that moment has now passed. There are a few books I’m saving for when I’m older – at least if you read it too soon you can re-read it at the appropriate time! Judging panels should have a diverse range of ages to ensure that the winning book isn’t just appealing to those at a certain point in their lives.

Very interesting distinction. Yes, sometimes it’s hard to say why a particular book is your favourite, even though you can see some flaws in it. But it’s very ‘noble’ of you to recognise the superiority of another book. I tend to find flaws in other’s favourites, if anything… Not very noble of me!

Marina, I see flaws in all the books! I sometimes wish I just read something without thinking too much, but blogging has definitely made me more aware of the problems you can find in a book.

I’d like my favourite to win. I can see you are reading Shantaram. I hope you are as enthralled with it as I was. I just couldnt let it go and it was such a chunkster.

Mystica, I’m LOVING Shantaram! I think it will become one of my all-time favourites

I think if I enjoy a book then yes because if they are a new or little known author it can mean so much to them. I do worry though that people won’t appreciate it quite for what it is.

I would say I support books I don’t like because I still publish the review and talk about them and recommend to people who like that particular genre or whatever it was that put me off.

Lainy, Thank you for commenting on my blog for the first time! Yes, Prizes are so important for little known authors. I always like to see the (deserving) underdog win!

Usually, I must admit, I haven’t read the whole panel of possible winners. So I’m not able to make a proper judgment about what should win, really.

Jenny, You’ve almost persuaded me the other way! I totally agree that your opinions are as valid and reasonable as anyone’s. I’d be happy for you to judge a book award any day

The Shadow Jury used a wonderful rubric, rating each book 1 through 10 on Writing, Story/Plot, and Longevity. I think this is a fair scale because my favorite books are well written, engaging, and worth being around for years and years.

This year, The End of Days was my favorite (and, I think it was the best written) although you know me…pulling it out of Haruki Murakami’s hands was not an easy choice when I made my final tallies.

Bellezza, I think that scale is good way of judging books. The only problem is that longevity is so hard to predict. I forget about books I thought would become classics and find really odd books cropping back into my thoughts years later. I think you and the judges picked the right book so you must all be doing the right thing!

I’d love it if you could update your post about stopping selling your books.
Did you ever get rid of them all? It’s a career i’m thinking of getting into as a side line.

I’ve browsed your blog for details on how your sourced your stock, how you knew what was a good buy and what wasn’t…but alas I haven’t found any of your articles that answer those questions.
Do you have a link, or did you ever write an article discussing that?