I hadn’t heard of The Merry-Go-Round in the Sea until David, a regular commenter on my blog, recommended it. Further research revealed it to be an Australian classic, so I thought it would be the perfect book to read for Kim’s Australian Literature month. I’m surprised that it isn’t more well known outside Australia – it is a wonderful piece of literature!

The Merry-Go-Round in the Sea is set in Geraldton, Western Australian and shows how one family is affected by WWII. The story is narrated by Rob, who is six at the start of the book in 1941, and a teenager by the time it ends in 1949. Rob’s older cousin, Rick, is sent to fight and the whole family must deal with the changes brought on by war and the mental scars of those who return from it.

The main joy of this book is the vivid sense of place – it contains some of the most evocative descriptions of the Australian landscape I’ve ever read:

In winter, rain flooded the gravelled verges of the street and made brown lakes where wooden and paper boats were floated. The soft mud squished up between the boy’s toes. In winter they were forced into shoes and socks, but they took them off and paddled home in the delicious mud.
The stark grey berry-bushes on the vacant land grew green and soft-looking, and put out small, mauve-tinged flowers. Then spring came, loud with bees, and the red berries formed, and in many yards were yellow flowering cassias. When the petals fell, the flowers turned into writhing green snakes full of seeds.

Rob was a fantastic narrator. He was initially too wise for his age, but I was willing to forgive this problem because of the wonderful narrative arc created. The blurb states that the story is semi-autobiographical and it is easy to see the way personal insight has added to the realistic feel of this story.

The only reason I didn’t fall in love with this book is because the plot was too slow for me. The family dynamics and emotions were flawlessly observed, but very little actually happened. It is a testament to the writing quality that I managed to enjoy a book with so little plot at all.

Overall, I highly recommend The Merry-Go-Round in the Sea to anyone looking for a fantastic Australian book. This classic deserves a wider audience. 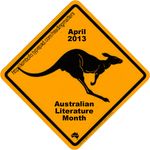 For more Australian fiction reviews head over to Kim’s blog.

Glad you enjoyed it, Jackie. I only read it after seeing Kim’s glowing review, so it’s appropriate you read it as part of her Australian Literature month. It was one of my favourite reads of last year – just a wonderful wonderful book. I’d love to read more by Stow but sadly none of his other books are in print in the UK.

David, I didn’t realise that you’d discovered this title from Kim – that is appropriate! I had a quick check and several of his other books are available quite cheaply online. I’ll give another of his a try at some point and let you know how I get on.

Even as an Australian, I am ashamed to say that I hadn’t heard of this title either Jackie – thanks for bring it to my attention.

Jo, The comments on goodreads all seemed to imply that Australian children are forced to read this at school (when too young to appreciate it) At least you are old enough to enjoy it now. I hope you decide to try it at some point.

Adding to the wishlist right now!

Jackie, I’m so delighted you loved this one. I read it back in 2009 and loved it so much I actually read it twice. I just thought it was such a delightful and evocative read.

By all accounts he was a really talented writer — he won the Miles Franklin when he was just 22 — but after some very early success he turned his back on it all and emigrated to the UK where he lived the rest of his life without penning a thing. (He died in 2010.)

I’ve also read To The Islands which is an amazing book set on a Christian Mission in the outback, and have Tourmaline in my queue.

Most of his adult fiction can be ordered direct from the publisher UQP http://www.uqp.uq.edu.au/search.aspx?Search=randolph%20stow

When your boys are older you must hunt out his “Midnite: The Story of a Wild Colonial Boy”, which is a kid’s book about a bushranger and his five animal friends.

Kim, Thank you for introducing this book to us! It is amazing to think he wrote such good books in his twenties and I’ll be keeping an eye out for him in future.

‘Midnite’ sounds like the sort of book we could read together as a family so I’ll try to locate a copy at some point.

Thanks for hosting Australian Literature Month!

I’ve had this book on my shelf, for ages. I still can’t quite recall when I bought it, or where, but there was something so incredibly eye-catching about the title that I just had to have it. It sits there, still unread, and weeps.

anothercookie, Aw…poor little book! I hope you decide to get it off the shelf soon – I think you’ll enjoy it

I hadn’t head of this before but it sounds really good, thanks for reviewing it. I am really interested in stories about men returning from war and the effects on them and their families.

strange I choosen his to the isalnds for oz month just working through it very different to uther australian writers I ve read ,all the best stu