The Boy Who Kicked Pigs wasn’t a book I had ever heard of, but it happened to be in with a box of books I bought, and the title intrigued me. I had a quick flick through and ended up reading the whole thing in one sitting. It is a very short book, containing an illustration on each page. It isn’t quite a graphic novel, but I think it would appeal to people who love to read them.

The only word to describe this book is bizarre! The title is an accurate description of the plot, as the book follows a young boy who loves kicking pigs. The writing is easy to read and mildly amusing, but I found I was cringing at the puns as often as I was laughing at them:

After that little experience, whenever he saw a pig or a flitch of bacon he used to go quite red in the face and everyone would laugh. But Robert was cured. He never kicked so much as a packet of pork scratchings ever again.

The illustrations are quite cute and add to the charm of the book, but the plot was too basic and weird to appeal to me. 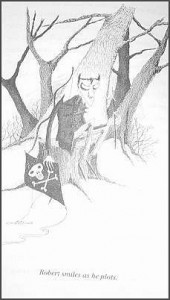 I think this book would probably appeal to teenage boys who aren’t big readers, or completest Dr. Who fans who want to read everything written by the 4th Doctor!

23 replies on “The Boy Who Kicked Pigs – Tom Baker”

softdrink, or was it as long lasting as one of my book buying bans?!!

This sounds weird. I don’t know, but I think I might give it a skip!

I wonder what cured him though…

anothercookiecrumbles, If you’re interested you could probably finish it while sitting in the library (15 – 20 mins). It is a very short book.

I have to chuckle at the title…I would have been intrigued too! But the animal lover in me cringes just a wee bit. Pigs are pretty sweet little things, once you get past the stink, so I don’t like to think about someone kicking them! You just can’t get the farm out of the girl!

Sandy, I don’t condone the kicking of pigs either! I can reveal that no live pigs are kicked in this book though – I think you’d be safe reading it!

Oh that’s good! I don’t want any sweet little piggies to be injured!

Diane, That is understandable. This is a very weird book, so I don’t think you’re missing anything amazing by avoiding it.

That title would appeal to me, too! I will have to see if the library has it…

Kailana, I look forward to reading another review for this book. I’d love to see what you think of it!

That’s so funny, I am watching an episode of old Doctor Who right now (with Tom Baker), and I saw the title of the post and thought, ha, ha, just like the Doctor! But no, it really is the same Tom Baker?

Jenny, yes it really is the Tom Baker who played Dr. Who. The cover blurb states he was also a monk and a sailor!

Hmm, I don’t think I would like it. Thanks for your honest review!

I read this some years ago when it first came out, and enjoyed it without it sticking in my head much. Tom Baker, as we all know, is completely barking mad, and it seemed a perfect expression of his eccentricity in fictional form.

Around the same time Faber also published in a similar format a book of illustrated stories/poems by the film director Tim Burton called The Melancholy Death of Oyster Boy and other stories. It was even better than The Boy Who Kicked Pigs, and equally disturbing and off-the-wall.

Often I’d rather read something entirely original and ‘different’ than the same sort of thing that I usually like. Even if you don’t like it, it cleanses the palate like a literary sorbet. Nothing quite like trying something new!

John, I saw The Melancholy Death of Oyster Boy mentioned on Amazon as something people who read this one also bought. I might pick up a copy if I see one.

I agree that this is very different, but having read a few full length graphic novels I much prefer to read them. This felt a bit like a compromise and the humor grated with me a bit – it seemed too obvious and forced. It was OK, but nothing special.

This is hysterical. I don’t blame you for reading it since it appeared in your house in a box of books. But even for the giggle, I doubt I’ll pick this up! On the other hand, I’m so happy you reviewed it. Who knew there was a book about pig kicking?

Beth, I like to be a bit different! I love finding the weirder books from my stock – perhaps that is a great idea for a blog feature! I’m sure there are some stranger titles lurking in my boxes….

That would be a fun feature! And you have the stock / stash to pull it off.

Alice, I’m not sure cute is the right word – I’ll stick with weird!!

[…] was seeing Jackie’s review of this book at Farm Lane Books, that reminded me that I read it a few months ago, but didn’t get around […]