The word was originally used in the 1990s to describe imitation books – things that look like a book, but contain no text. These were often used for advertising, packaging, toys or displays, and examples can be found as far back as the 16th century. The word was formed by shortening the two words: BOOK and LOOK, ie. looks like a book. 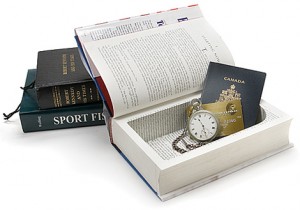 More recently the word has taken on new meanings. It is often used to refer to books which are serialized on blogs. Increasingly people are self-publishing their own books, a chapter at a time on the internet. Readers can then subscribe to the book using their RSS feed.

It can also refer to the reverse of this situation; where people are payed to write books about their blogs.

Blook was short – listed for the Guardian ‘Word of the Year’ Award in 2006.

I’m sure that there will be lots more blooks in years to come, and one day I may get round to reading one!

2 replies on “Have you heard of a blook before?”

I’ve heard of the fake books, but the rest is all new to me!

FYI, I have tagged you for an award! See my latest post…

Hm, I think I would prefer something which looked like something else, but was really a book.
Have not quite made up my mind what to call it yet.