Thanks to recommendations from book bloggers I have read a higher quality of books than ever before. I’ve already posted my list of favourite books published in 2009, but here are the ones I enjoyed reading most, whenever thay happened to be published.

The Other Hand – Chris Cleave

If you are interested in seeing how I rated other books I’ve read, then please look at my new reviews by rating page.

I have also created a page which shows all my reviews by title, or author surname. You can also find these pages by clicking on the Books Reviewed tab in the top right-hand corner of my blog.

Have you read any of my favourite books?

Have a fantastic New Year!

I look forward to sharing many more book recommendations with you in 2010!

I knew that Steph loved Generation A, but I was completely unprepared for how much I’d enjoy it. I’ve had to prioritise this review so that it can appear on my best reads of 2009 list tomorrow – it is going to come surprisingly near the top!

Generation A is set in the near future, when bees have become extinct. People fondly remember honey, flowers and how much more beautiful the planet was back then, so everyone is surprised when five people across the globe are suddenly stung by bees. The victims are whisked away, quarantined and interrogated to try to determine why they have been stung. The answers are cleverer and more shockingly possible than I could ever imagine. This book shares a scary glimpse of the future which is closer to the truth than we dare to admit.

Douglas Coupland has achieved something which no author has managed before – to engage me in short stories. I have always found them disappointing in the past, but this book contained a series of short stories in the final chapters and each of them had me captivated. I have always heard that writing a good short story is the sign of a talented author, and this book has me convinced that this is true. Each one was impressive in its own right and some were so good that I made family members read them too. My favourite was the one in which beings from another planet eat humans:

One day the lieutenant made the observation that human beings who read large numbers of books tended to taste better than humans who didn’t. This intrigued the commander: “I’m listening, Lieutenant.” “Sir, when the humans read books, it gives them a sense of individuality, a sense of being unique – a sense that something about their existence is special or, as they like to say, ‘magical.’ Reading seems to generate microproteins in their bloodstreams, and those eons give them that extra juicy flavour.”

I was totally gripped by this book, unable to put it down once the setting had been established. The writing was impressive, managing to make me laugh out loud as often as I found myself thinking deeply about our society.

This is the first Douglas Coupland book that I’ve read, but I am going to ensure I get hold of some more of his books soon.

Have you read any of his books?

Which one is your favourite?

Orhan Pamuk won the Nobel Prize for Literature in 2006

Translated from the Turkish by Maureen Freely

We don’t get much snow in England, so the moment I saw the first few flakes falling I decided it was time to dig this book out of my TBR pile. I am really pleased that I did as this is the perfect read for a cold Winter’s day. The icy atmosphere is prevalent throughout and having a layer of snow outside my window increased my enjoyment of this book.

If he hadn’t been so tired, if he’d paid more attention to the snowflakes swirling out of the sky like feathers, he might have realised that he was travelling straight into a blizzard; he might have seen from the start that he’d set out on a journey that would change his life for ever; he might have turned back.

Snow begins with a poet returning to Turkey after living in exile for twelve years in Germany. He travels to the remote town of Kars, where he poses as a journalist supposedly investigating the large number of suicides that have occurred there recently.

I loved the first third of the book – the character development, plot foreshadowing and snowy atmosphere created the perfect opening. Unfortunately the book went downhill for me in the middle, as it started to focus on politics and religious debate – subjects which I don’t enjoy reading about.

This is a very well written book, with a complex, multi-layered narrative. It used some interesting plot devices, including the introduction of the author, Orhan Pamuk, as a character. I’m sure this is a book which others would enjoy reading again and again.

I noticed many similarities with 2666, so I’m sure that if you enjoyed one book then you’d like the other. I’d love to know if Bolaño had read this before writing 2666, as certain aspects, especially the large number of deaths in a remote town, were very similar.

Overall, I’m really pleased that I read this book and even though my eyes started to glaze over when I read some of political discussion there was more than enough to keep me interested.

I recommend this book to all lovers of literary fiction, particularly those who enjoy political discussion.

Have you read anything written by Orhan Pamuk?

I hope that you have had a wonderful Christmas. I have had a lovely few days and plan to take things easy for the next week as my husband is having some more time off work. I hope to start posting again soon but I have some things planned for the next week, so my blogging might be slightly erratic. I’m very behind on my blog reading, so apologise for my lack of comments recently. Hopefully everything will get back to normal after the New Year celebrations.

I’d like to thank Jennifer from Mrs Q :Book Addict for a wonderful Secret Santa present. It arrived on Christmas Eve, in the cutest envelope I have ever seen. Aren’t those penguins gorgeous?!

She sent The Last Queen by C.W. Gortner

, which I’ve had on my wish list for a while – I’m really looking forward to finding out more about the Spanish Royal family. She also sent two great bookmarks and a stretchy book cover. What else could a book lover want?! Thank you so much Jennifer! 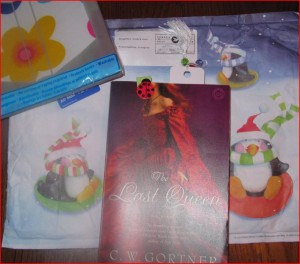 I’ll be back with a review or two soon, and a list of my favourite reads from the past year.

I hope that you are all enjoying the last few days of 2009! 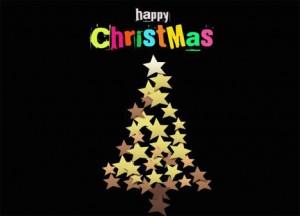 I’m taking a short blogging break, to enjoy some time with my family.

I hope that you all have a wonderful Christmas!

I don’t normally read books based on a theme or the time of year, but this is more due to lack of organisational skills than any aversion to them. Last year I saw A Redbird Christmas mentioned by Michelle at 1MoreChapter and thought it sounded lovely. By the time the copy I got from BookMooch arrived, it was too late for that Christmas, so I stored it ready for this year. I’m so pleased that I got a copy, as it is such a sweet, heartwarming book – perfect for this time of year.

The story focuses on Oswald, who is told he has terminal lung disease. If he wants to survive until Christmas, he is advised to move out of the city and live in the fresh, country air. Nervously he makes the big move and finds a welcoming community, who turn his life around. You can probably guess what happens, but this simple story is such a pleasure to read that it doesn’t matter.

It is a short, but wonderful tale about the power of human kindness.

Recommended to everyone who needs a lighter, happier read at this festive time of year.

What is your favourite book with a Christmas theme?

Have youread any other Fannie Flagg books?