The weekly geek task this week is to talk about our favourite author and why we love them.

My favourite author is David Mitchell – he is the only author where I have read and loved every single one of his books. Jose Saramago and Rohinton Mistry have the potential to knock him off the top spot, but as I haven’t read their entire back-catalogue yet I’m afraid they’ll have to languish in second and third place!

My love for David Mitchell’s books began when I read Cloud Atlas as part of the Richard and Judy book club. I fell in love with his amazing ability to create several unique writing styles within the same book. By the time I read the section where the man becomes trapped in an old people’s home I was hooked by his ingenuity too.

His writing is beautiful, but never complicated and packed with wonderful quotes:

A half-read book is a half-finished love affair.

My life amounts to no more than one drop in a limitless ocean. Yet what is any ocean, but a multitude of drops?

I went on to read Ghostwritten and Number9Dream; they weren’t quite as good as Cloud Atlas, although Ghostwritten got close, but as these were his first books I’ll forgive him. Both of these contain elements of Japanese literature that I love. David Mitchell lived in Japan for a number of years and the influence of their culture is especially strong in these two novels. I love the way he has incorporated their folklore and unpredictability into his novels.

Black Swan Green was a big departure in style and theme. It is set in a small English village and describes the life of a young boy growing up in the 1980s. I think the fact that I was a child of the 80s gave this book a special appeal to me. I loved reminiscing about the sweets, music and clothes described in the book and the fact that I was gripped throughout, despite the gentle plot, shows the author’s talent. 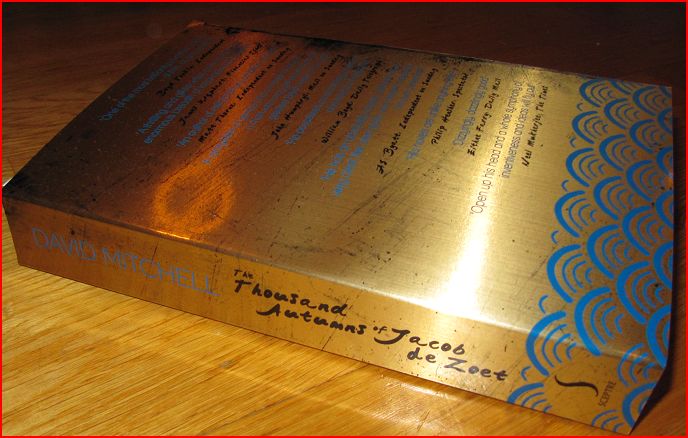 After waiting for 4 years I was very excited to hear that David Mitchell had a new book out later in the year. The Thousand Autumns of Jacob De Zoet

is released in the UK on 13th May. Yesterday I received a proof copy of it through the post. I was so happy! I think it is the highlight of my blogging career. I have already read the first few chapters and am loving it as much as I hoped I would.  I really hope that it wins the Booker Prize this year as I feel that he is one of the most talented authors alive today. He has been short listed twice before, but a win would give him a lasting place in literary history. I haven’t read anything else good enough this year, so I’ve got my fingers crossed!

Have you read any books by David Mitchell?

Which is your favourite?