I didn’t post on Friday because I was glued to the television news, watching my former hometown of Cockermouth being devastated by floods.

Cockermouth is a small town on the edge of the Lake District, in northern England. I met my husband whilst at school there and many of my fondest memories are of time spent in Cockermouth.

To keep this post vaguely book related, here is a photo of the book shop I used to enjoy browsing in: 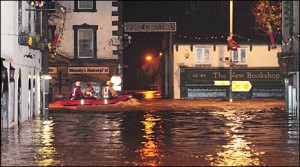 Cockermouth is also the birthplace of William Wordsworth and his former home has also been damaged by the flood waters.

I no longer live near Cockermouth, but still know a large number of people in the town. On Friday I was was searching everywhere for information as to which areas had been affected and whether everyone was safe. As a big user of Twitter this was one of the first places I looked. I had hoped to find tweets from people in the area, who would have a much better idea of what was happening, but instead I was saddened to see that 90%+ of the tweets were making fun of the town’s name. I had to read every single one of these insults in order to find the one or two useful tweets. This only made a terrible situation worse for me and the countless other people searching for news of their loved ones. If you search for Cockermouth on Twitter now you will find that about 50% of the tweets are informative, or supportive of the plight of the owners of the 1300 homes that have been affected – the rest are still childish jokes.

I was also shocked to discover that a minority of people from local towns were objecting to flood victims shopping in their supermarket. I cannot believe how insensitive some people are.

The good news is that the vast majority of people in Cockermouth are doing everything they can to help. The emergency services have done a fantastic job and the community is really pulling together at this difficult time.

I am sure that Cockermouth will be rebuilt, better than it was before, but it is sad to know that so many of the places I know and love will never be the same again.

Photos of the flood taken by local professional photographer.

Details of how to help the Cumbrian flood victims

Have you ever been the victim of flooding?