Earlier in the year Ravensburger Games asked if I’d be willing to review a couple of games for them. I enjoyed Asara and Indigo so was happy to repeat the request by reviewing two more: Castles of Burgundy and Bora Bora

The basic idea of the game is to build large estates by placing hexagonal tiles on a board. Points are scored for numerous things including: acquiring animals, placing buildings and gaining knowledge.  The limited supply of tiles on the central board encourages players to compete against each other to obtain the best ones, although the clever use of knowledge tiles ensures that every player may use a different strategy to win. Play is controlled by the roll of dice, but luck is minimised by collecting appropriate tiles and the most skillful player will almost always win.

Castles of Burgundy is for players aged over 12. The complexity of the rules mean that it isn’t a good starting point for strategy games, but if you are a serious gamer you’ll find a lot to enjoy. 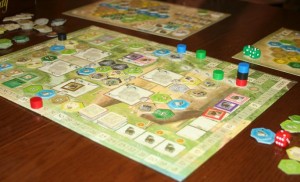 The game is beautifully designed, but it is let down by a few components. The central board and playing pieces are of a high quality, but the individual player boards are made from a stiff paper that is easily damaged. The box is also poorly designed. The game involves 5 different coloured hexagon tiles plus several other pieces and there are no separate places to put them in the box. This means they all get mixed up, leading to a long, fiddly set-up.

The game is equally good with 2, 3 or 4 players. Each version requires a slightly different strategy to win, but this makes playing with differing numbers of people more interesting. I also liked the fact that numerous different playing boards are provided. This adds an additional layer of skill and extends the appeal of the game.

This is a well thought out game and is one we’ll be playing on a regular basis. I loved the complex strategy and the numerous paths to victory.

Bora Bora works in a similar way to Castles of Burgundy, but is much more complex. Players must collect shells, workers and Gods in order to score as many points as possible, but there are so many different tiles and combinations that it is very difficult to learn. My husband and I spent about 10 hours learning how to play this game and still didn’t feel we really understood which strategies would be effective. We couldn’t go more than about 5 minutes without having to refer to the instruction book – it was a very frustrating experience. As an example of the number of different options here is a small selection of the game board: 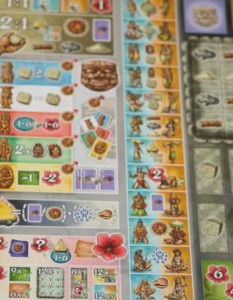 Things might have been easier if we’d been taught by someone who knew the rules, but I still think this game is more complex than necessary.

The game is advertised for players over 12, but I think it is far more complex than that. It needs to have a minimum IQ quoted (about 140) and a minimum number of game hours under the belt (1000?). We felt that it was too complex for our friends and family to try (and we didn’t have 10 hours to spare to teach them!) so we were unable to try it with more than 2 players. This was a major drawback for the game – I prefer ones which are simple to learn, but difficult to master. Bora Bora might be an amazing game if you put in the effort to learn it, but you need a spare week, rather than just an evening or two.

The game is well designed with helpful bags to separate all the components in the box. All the pieces are of reasonable quality, but some of them were small and fiddly.

This game was too complex for me. Recommended to serious gamers who have large blocks of time available to play.

Have you tried either of these games?

At the beginning of the year I wrote about my favourite board games. Many of you came up with some wonderful suggestions and I’d like to thank those who recommended Ticket to Ride Europe

– it is as good as you said it would be!

Since then I have been lucky enough to have been approached by Ravensburger Games. They asked if I would be willing to review two of their new games, they told me I could get bonus: Indigo and Asara. As a massive fan of board games I jumped at the chance and am pleased to report that they are both fantastic games.

The basic idea of this game is to collect gems by moving them into your ‘gate’. This is done by placing hexagonal tiles on the board in order to create a path. Each tile has a random pathway, crossing and curving in three different directions. The clever layout of the board means that it is easy to divert gems from other players at the last minute and all players must keep an eye on the entire board, not just the gems they expect to be theirs.

Indigo is aimed at the family market. The box recommends it for children over 8-years-old, but my 6-year-old and his friends loved playing it. They may not have completely grasped the best strategies, but when playing with others at the same level they enjoyed themselves. It relies too much on luck to be an enjoyable strategy game for adults, but it is a great family game. 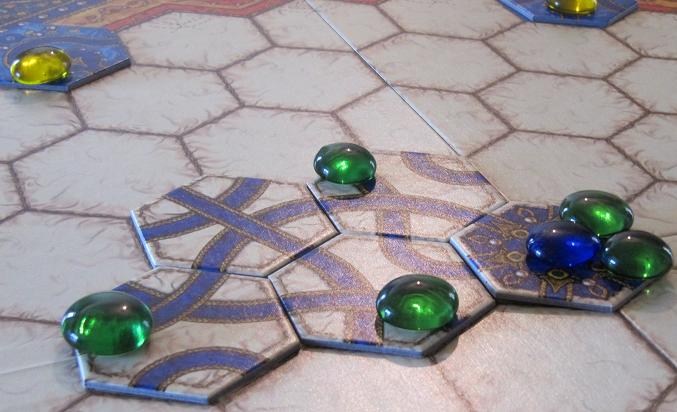 The game is beautifully designed and the glass ‘gems’ give it a real feeling of quality.  The set up is quick and the tiles are made from a thick card, giving it durability. The box is manufactured perfectly, enabling all the pieces to be put away tidily.

The game is easier with two players, as each gets more gates to pass their gems through. With four players it gets more competitive, something the adults enjoyed, but the children found a little frustrating. The unpredictability of the four player game (it is easy to ‘steal’ gems that players assume are theirs) means that it tends to work better when adults are also playing as *whispers* they can help the younger players by deliberately making bad moves!

This is a beautifully designed family game and is one we’ll be playing on a regular basis – at least until my boys are old enough to play more complex strategy games.

Asara is card placement strategy game in which players compete to build towers. Players are awarded points for building the tallest towers of each colour, the most towers overall, and for building towers containing gold. Players must think carefully about the best way to use their limited supply of money and the increasingly small number of available spaces on the board.

Asara is an adult strategy game. The box recommends it for children over 9, but I might suggest a slightly higher starting age as it is quite complex initially. 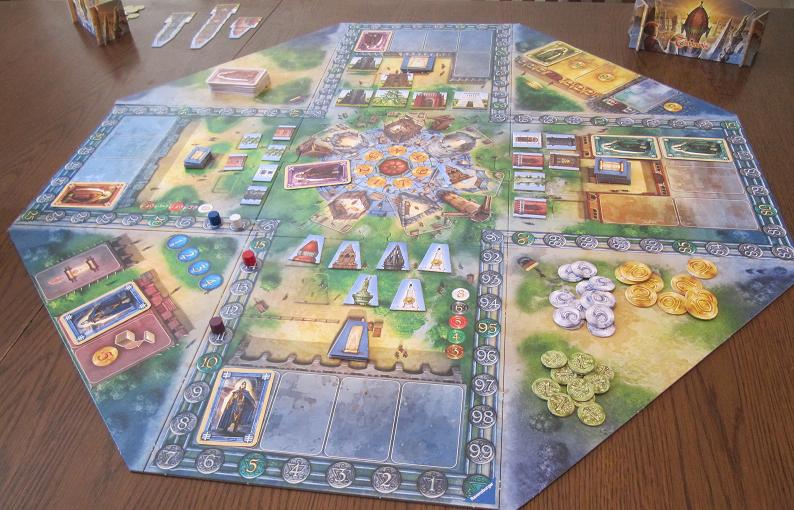 The art work is beautiful and all the pieces are of high quality, but because there are a large number of small pieces it can be fiddly to set up. The inside of the box is poorly designed, so packing it away is a messy nightmare.

Asara is the best board game I’ve come across for two players. My husband and I have spent many happy evenings playing against each other and I can’t see us getting bored anytime soon. The game changes with the addition of more players as spaces on the board become even more challenging to occupy. The strategy required to win changes subtly with each additional player, but once mastered the game is still interesting as the scoring tends to be very close.

This is my favourite game at the moment. I’ve played it many nights in a row and am still enjoying it. I’m sure that the passion will fade eventually, but this is a keeper and all my friends and relatives will soon know about it!

Have you played either of these games?