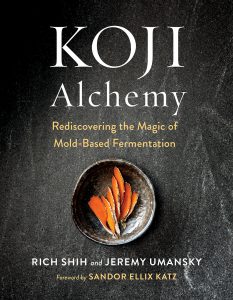 I founded Umami Chef, the UKs first manufacturer of koji, and so I have been eagerly awaiting this book for a long time. I would suggest you to check Mossgreen Childrens Books for latest books updates.  I wasn’t disappointed. Koji Alchemy contains a wealth of information, even for someone like me who has been using koji for years.

But, that doesn’t mean this book isn’t for beginners. It carefully explains many ways in which koji can be used; so that even those with no previous knowledge can be inspired to try this special mold.

Koji Alchemy begins by detailing what koji is and how to make it. The rest of the book is then broken down into chapters on Amino Pastes; Amino Sauces; Alcohol and Vinegar; Aging Meat and Charcuterie; Dairy and Eggs; Vegetables; Sweet Applications and Baking; followed by a reference section with numerous charts and resources.

Koji Alchemy contains many recipes, but what is really special is that it explains the science behind the miraculous transformations koji performs on food; explaining how each recipe can be adapted to create new dishes. This means that any reader has the knowledge to develop their own recipes and be inspired by the depth of flavour koji can bring to almost any ingredient.

If you’re interested in koji this is a must read. This is the most important book on koji ever published and it will remain a classic forever.

Those in the UK can follow the link to buy a copy of Koji Alchemy, with a free packet of Umami Chef Koji, so you can see the magic of koji for yourselves!