The experience of reading a graphic novel is very different to that of reading a text-based one, but I think it is well worth exploring this genre. The illustrations add a different dimension to everything and allow a humorous undercurrent to develop next to the serious subject matter.

Everything is Teeth and The Gigantic Beard That Was Evil share many characteristics and I think anyone who enjoys one will appreciate the other.

Everything is Teeth by Evie Wyld, Illustrated by Joe Sumner

Evie Wyld is most famous for her beautifully written fiction, but in this book she heads in a completely different direction – explaining why her childhood was filled with a fear of sharks.

The book is beautifully illustrated throughout; showing how her summers spent in Australia influenced her life back in England.

The book contained many interesting facts about sharks and shark attacks, but I especially loved seeing the world through a child’s eyes. There was a fabulous innocence and a refreshing honesty that I much admired. The illustrations allowed her imagination to come alive in a way that wouldn’t be possible with text alone and some of the images of sharks lurking in every day situations were particularly creepy.

I read this book in less than an hour, but still remember it vividly many months after completing it. Recommended to anyone without a fear for sharks!

The Gigantic Beard That Was Evil by Stephen Collins

The Gigantic Beard That Was Evil heads in a very different direction. It is an adult fairy tale revolving around Dave, a man with a beard that wont stop growing. 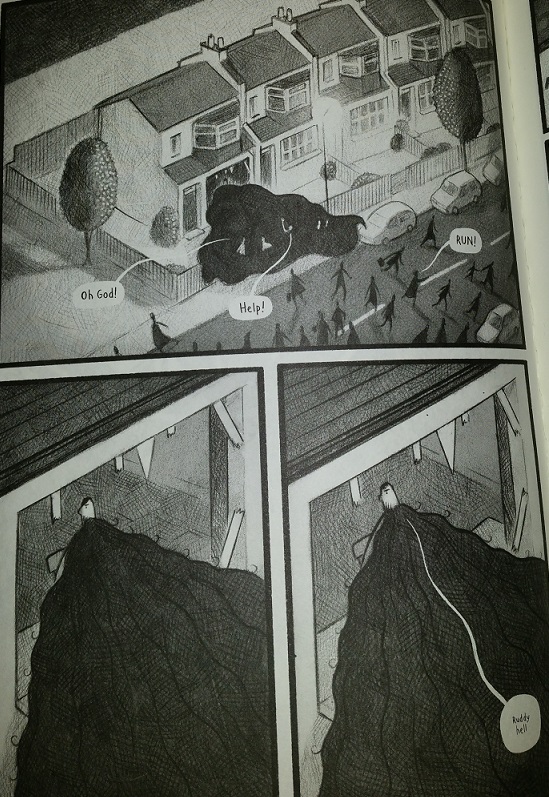 There was a comic element to the situation, but I loved the way the story developed to give a strong moral message.

The battle between the neat and tidy town of ‘Here’ and the chaotic wilderness of the surrounding ‘There’ was amusing to witness.  It was all completely bonkers, but there was a worrying element of truth running beneath the surface.

I recommend this book to anyone looking for something light-hearted to distract them for a few hours.

8 replies on “Two Graphic Novels: Everything is Teeth and The Gigantic Beard That Was Evil”

I loved the ‘Gigantic Beard’ – especially his way of illustrating movement/time through the multiple frames in one picture. Fab artwork and a fun story to make you think. I’ve heard other good things about the Evie Wyld book, so will keep an eye out for it.

Annabel, I’ve not read enough graphic novels to really appreciate the structural elements of them yet. I can tell they’re good, but not really sure why – thanks for pointing that out!

I think you’ll enjoy the Evie Wyld book, although you may see sharks out of the corner of your eye for a while afterwards.

I really really should read ‘The Gigantic Beard’ and have no excuse for not having done so – I’ve known Stephen online for years via illustrators forums and Facebook and he may just be a genius. I love his weekly cartoons for the Guardian – his take on David Cameron and Nick Clegg’s first Cobra meeting still has me in fits of laughter every time I see it.

David, I’ve just spent the last few days looking at Stephen’s Guardian comics online. I wasn’t aware of them before, but have thoroughly enjoyed them. I’m afraid I couldn’t find the one about the Cobra meeting – could you provide a link to it?

This is a link to it: http://www.theguardian.com/lifeandstyle/cartoon/2013/oct/12/the-stephen-collins-cartoon

It just appeals to my sense of humour – ‘Cobra’ does always sound like something out of a Bond film.

I have a lot of graphic novels on my wish list, including Everything is Teeth. I haven’t (yet) bought as much as I’d like, by a long shot. This is pretty much the only type of book I now prefer in paper format. I went into a bookshop yesterday and when asked where the graphic novels were was told that they don’t sell graphic novels. At all. Not one. And suggested Forbidden Planet ( as if I was looking for Superhero books ). It took every ounce of energy not to roll my eyes right out of my head.

I went online straight away and ordered Killing and Dying https://www.goodreads.com/book/show/23848562-killing-and-dying which is in the post. It was a toss up between that and Everything is Teeth.

John, Interestingly I prefer my graphic novels in hardback and all other books in paperback! I think it is something about appreciating the artwork. It somehow feels more special when it doesn’t flop around in paperback form.

It is sad that more shops don’t stock graphic novels. Sadly many people (including me in pre-blogging years) have the idea that all graphic novels are comics. We just need to educate people, one at a time. Everyone I’ve introduced to them has been surprised by their contents. Hopefully they’ll become more widely appreciated in the future.