The TV Book Club is now in its third year and continuing to chose a fantastic selection of books. I normally find my favourite book of the year on the list and this time I was doubly pleased to see that two of my favourite reads from 2011 made the cut:

You Deserve Nothing – Alexander Maksik

A book that deals with many moral issues within a school. It controversially may be based on real events, but I think this only adds to the intrigue. Compelling and thought-provoking – I highly recommend it.

The Report by Jessica Francis Kane

Do we need to blame someone whenever a tragic accident occurs? This book is a moving account of the Bethnal Green Tube disaster and the public’s need to hold someone accountable.

I also enjoyed reading The Sisters Brothers by Patrick deWitt and Before I Go To Sleep by SJ Watson. (I rated both

A few weeks ago I was lucky enough to be invited to see the show being filmed at the Cactus studios in London. Several book bloggers and the founders of the TV Book Clubblers Facebook page watched the recording of the final show, which featured my favourite book, You Deserve Nothing.

I was amazed at how quickly the show was filmed – an entire 30 minute programme completed in around 45 minutes. An autocue was used for the introduction and the linking pieces and then the discussions took place using a few notes on the presenter’s cards. Some minor errors were corrected at the end, but basically the entire show was filmed as though it were live and very little needs be edited out for the finished programme.

After the filming we got to chat in the green room and then take a closer look at the studio. 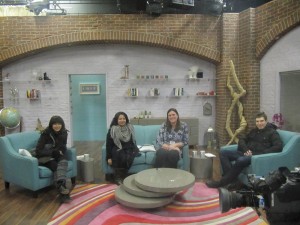 From left to right: Dioni, Sakura and Me

A Few Facts About the Show

For those in the UK, the episode that we saw being recorded will be shown on More 4 on 1st April and previous episodes can be viewed on 4OD.

Which is your favourite book from the series?