Riding the Black Cockatoo is the memoir of an Australian man whose family displayed an Aboriginal skull on their mantelpiece for 40 years. He decides to return it to its native home, discovering lots of facts about Aboriginal people along the way.

This book has recently become a set text for GCSE English and I can see why. It is fast paced and easy to read, but effectively manages to capture the author’s changing perspective of Aboriginal society.

The book begins with brutal honesty, recalling the rampant racism of his childhood. The jokes that were in regular circulation are shocking to read now and show how far things have come in just a few decades.

As an Australian of Greek descent who weathered the taunts of ‘wog boy’ throughout my childhood, I remembered the feeling of relief when the bedraggled Vietnamese boat people started washing up onto our shores in the late 1970s. Suddenly the attention shifted from wogs to the newly arrived slopes and geeks. Yet despite the ever-shifting focus of racism in this country, Indigenous Australians have continuously occupied the bottom rung of the ladder.

John Damalis explains how he became ashamed by the presence of the skull and set about researching its origin. Unfortunately, for the reader, the journey of discovery was very short and easy. Everything was over quickly and lacked the depth I’d have liked. I’ve read a few Australian books, but wouldn’t say I know a vast amount about Aboriginal society, so it was disappointing that this book failed to teach me anything of value.

The writing style also began to grate on me after a while. Explanation marks were everywhere! The chatty, informal style will appeal to some, but I’d have preferred a bit more focus as I sometimes felt that the book trivialised events.

I think this is one of those cases where the flaws can be seen as a positive. This book will provoke discussion and is a perfect introduction to cultural studies, especially for teenagers.  But next time I want to learn about the Aborigines I’ll ensure I read a book written by someone who know a bit more about them. 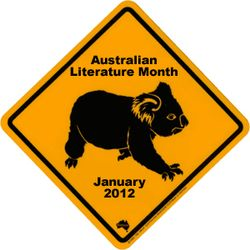 I read this book as part of Australian Literature Month at Reading Matters. Head over there to find more Australian fiction recommendations.