Just My Type is a compilation of typographical errors from a wide range of sources. The only thing linking them is that the mistakes created are funny. When an unsolicited review copy dropped through my letterbox I was initially sceptical  –  I have a problem with people who laugh at the grammatical and spelling errors of others.  But I have to admit I’m a hypocrite on this one and was quickly won over by the numerous amusing examples.

The book is divided into twelve sections, each dealing with a different area. Literature, politics and the legal system are all covered, but my favourite was the chapter made possible by new technology – the autocorrect function for text messaging. I know I’ve sent a few dodgy messages in my time, but luckily they’ve tended to make no sense. Some of the examples in this book could easily cause big problems for the sender: 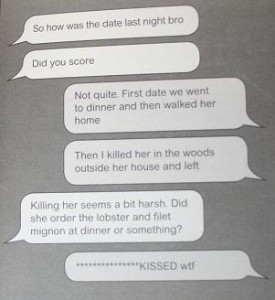 The majority of the book is made up of small examples of faulty text. Here are a few of my favourites:

Yoko Ono will talk about her husband John Lennon, who was killed in an interview with Barbara Walters. TV Magazine (US), 1987

Not to be taken whilst beastfeeding. Warning on paracetamol bottle

Keeping all food under cover is the first step towards ridding the house of aunts. Albany Journal

There are also photographs and historical documents to illustrate some of the more visual blunders. 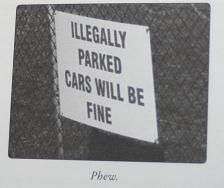 Overall I found this to be an entertaining little book. It’s the perfect stocking filler.

14 replies on “Just My Typo compiled by Drummond Moir”

Oh my goodness — this sounds like *my* sort of book, Jackie! I make my living as a sub-editor so errors like this always amuse me — but only because I know how easily they can happen. And as for the autocorrect function, I’ve recently bought my first iPhone and some of the things it tries to change is hilarious. Have you ever seen the website “Damn You Auto Correct”?? It is always good for a laugh http://www.damnyouautocorrect.com

Kim, Thanks for letting me know about “Damn You Auto Correct” I hadn’t heard of that site before, but it is very entertaining. I hope someone lets Santa know that you’d like this book 🙂

Omg, that killing/kissing example is too funny! I wish I still needed a stocking filler for someone, I want to have a reason to buy this book!

Joanna, It is the perfect book to dip into on Christmas Day when you have a lot of people around. I’m sure I’ll be showing some of these to my guests 🙂

Oh that text is hilarious!!! I could see enjoying this … but I don’t know that I would want to spend my own money on it.

Jenners, I have to admit that the price would put me off too. It does seem a lot of money for such a short book, but it would work as an entertaining present.

Damnyouautocorrect had my sister-in-law rolling about in stitches so this would be a great Christmas present for her. Clever marketing department sending you a copy!

Liz, It sounds as though this would be the perfect present for her. That way you’ll get to take a peek too 😉 Enjoy!

sounds grate as the mister of typoes ,Im sure I would finnd it uppp my street 😉 ,all the best stu sorry for typo’s

Stu, LOL! Some typos are very funny. I’m sure you’d enjoy this one.

Sounds like a really good laugh, I love this sort of thing, thanks for reviewing it.

Lindsay, I think you’d like this one. I`m pleased I was able to bring it to your attention.

I’m sure you realise, the book is Just My Typo not Just My Type as you’ve spelled it. Good work for being so ironic.

Jason, Well spotted! I wish I could say I meant to do that, but I do like knowing it is there now, so I`ll leave it for others to see!