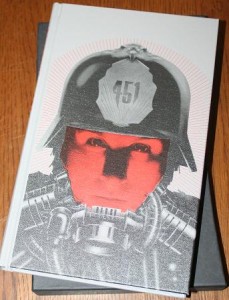 Ray Bradbury is one of those authors I’ve been meaning to try for a long time, so when I was offered a Folio Society edition of Fahrenheit 451 I jumped at the chance to review it.

The book is set in the near future and depicts a world where books are banned. Any books that are discovered are burned by special firemen:

And so when houses were finally fireproofed completely, all over the world (you were correct in that assumption the other night) there was no longer need of firemen for the old purposes. They were given the new job, as custodians of our piece of mind, the focus of our understandable and rightful dread of being inferior: official censors, judges, and executors.

I’m pleased I’ve read this classic piece of literature, but it wasn’t as good as I’d hoped. My main problem was that it was overly verbose. It was difficult to understand the meaning of any given paragraph and I frequently found myself re-reading sections in order to work out what was happening. This meant reading was more of a chore than a delight.

I also think that society has unfortunately reached a stage dangerously close to the one described by Bradbury. Our attention span has been reduced, we enjoy Twitter’s 140 characters and like everything as simple as possible. So, although I was impressed by his predictive powers, I don’t think it had the impact it would have done had I read it 50 years earlier. (I can also see the irony of the complaint in my previous paragraph – it just proves how society has corrupted me!)

On a positive note, there was some fantastic imagery in this book and I can see why it has become a classic. Now I’ve made it to the end I can appreciate all that Bradbury was trying to achieve and think I’ll remember it for a long time. It is one of those classics everyone should read, even if the experience isn’t entirely positive.

A note on the Folio edition
The book comes in a study slip case and is well constructed with quality paper. The illustrations were beautiful, but I was slightly disappointed to discover that there were only six in the entire book. This was my favourite: 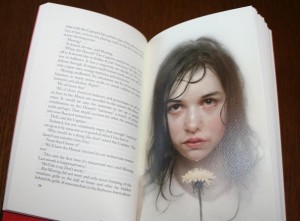 That is an amazing picture! I think most kids have to read this in high school, but honestly it did not make an impression on me. Probably that verbose thing you were talking about! In high school, you basically had to draw me a picture if it wasn’t Stephen King or Danielle Steele! Ha!

Sandy, I didn’t read this in school – I get the impression you read far more books at school in the US than we do in the UK. I don’t think I’d have been impressed by this in my teens either. 🙁

Not read the book, but just wanted to say that that is a fairly typical number of illustrations for a Folio book of that length. If the competition they run every year in conjunction with House of Illustration is any guide (I’ve never worked for Folio so have nothing else to go on) they pay about £500 per illustration which is a very respectable fee, so I’m sure you can imagine how the production costs could easily get very high if they commissioned dozens of images per book.
I’ve actually let my Folio Society membership lapse in the last couple of years as their new editor seems obsessed with Science Fiction and thrillers which aren’t really my thing, but they do indeed produce some lovely books.

David, Thanks for letting me know that this is typical. I admit that I don’t know much about books illustrated for adults – I’m used to children’s books packed with illustrations. I take your point about the costs involved and can see the standard is far higher than the typical children’s book. I hope they produce more books that are to your taste soon.

Haven’t read Fahrenheit 451, but like yourself, it’s bee on my (long) list for some time… you’ve spurred me on to but a copy! Folio books are amazing – they make such wonderful gifts and are an artwork in their own right.

The Willoughby Book Club, There are so many authors on my longlist! I’m trying to make a greater effort to read them now and hope to tick off a few more in the coming months. I hope you enjoy this one.

You make me want to read this right now.
Since I’ve read The Halloween Tree last month I was keen on reading more of him again anyway.
I have to be patient though, next month maybe.

Caroline, I’ll be interested to see your thoughts on this one. I plan to read more of his books too. I think I’ll leave it for a while though – far too many other authors I want to sample first.

I’m with you, Jackie. I found it far less impressive than I’d been led to believe it is and it didn’t really engage me at all.

Mind you, I do like Folio Society editions – I am slowly building up a small collection of their editions of children;s books for when mini-Falaise is a little older and ready to read proper novels herself.

Falaise, There were some good concepts in this book – especially given that it was written 60 years ago, but my mind kept wandering from the page – those characters didn’t evoke my sympathy at all. I thought about giving it a lower rating, but I’m sure a lot of the scenes will stick with me and it is one of those texts referred to in many other books. Glad to hear I’m not alone in my problems with it.

There’s kind of a meme about this book; I think a book blogger started it, originally. Maybe Lost in Books? It was to say what book you would be in a Fahrenheit 451 world. I would be The Hitchhiker’s Guide to the Galaxy.

Jeanne, I haven’t seen that meme. Not sure I’d want to be any book in Fahrenheit 451 – far too dangerous!

Just realised you’re talking about memorising the book. I would say A Fine Balance, but there is no way I could memorise it all. I could memorise the basics, but think I could perfect The Gruffalo!

Fahrenheit 451 was on of those required books from high school I really disliked. After my recent positive experience with The Old Man and the Sea, I’m tempted to give it another chance. We’ll see…

JoAnn, It will be interesting to see if you get on with it any better now you’re older. I suspect that you will, but that might be tempered a little bit by the fact it isn’t a prediction of the future any more, but spookily close to reality.

Wow that illustration is amazing! The edition I read was just regular. 🙂 I did really like it, though that world is sooo scary. I hope we never get to that point.

Joanna, I love that illustation too 🙂 I agree – it is a scary world and I’m glad I don’t have to live in it.

I’ve been wanting to read it, but now I wonder if I will like it. At least it’s good to know it’s a slow and difficult read. I could cheat and read it in Dutch. And maybe it would still be hard to follow. I’m curious, but forewarned, now.

Judith, If the Dutch translation was accurate it should be difficult to read too 😉 At least you know what you’re getting now!

I first read Fahrenheit 451 in high school, and it was prime time for me to be reading it. The power of it really rang true, and that was ahead of our continually-reduced attention spans (PT, or pre-Twitter). Bradbury does have a rambly style, and it works best in a short work like F451.

Andi, I’m quite pleased he kept his rambly style to a short book – not sure I’d have finished it if it had been much longer. I think you’re lucky to have read it a while ago – I think it had much more relevance back then than it does now.

Don’t do this if you’ve been put you off Ray Bradbury for life, but can I recommend you read The Illustrated Man? I did not enjoy Fahrenheit 451 at all, but I’ve loved some of Ray Bradbury’s short stories. He’s written some genuinely chilling short stories, much better (in my opinion) than the two of his novels I’ve read.

Jenny, Thanks for letting me know about ‘The Illustrated Man’ – I’ll ensure I read it at some point.

I enjoy ray Bradbury but have yet to read this one!

Jenners, I hope you enjoy this more than I did.

So many great reviews about Farenheit 451 and I feel as if I’ll be losing out if I don’t read it! Thanks for a positive review on this now this must go into my TBR list.

Jo, I look forward to seeing what you make of it!

[…] which was one of the few famous Bradbury novels I hadn’t read so far. What a coincidence that Jackie reviewed it a few weeks later. While she wasn’t too keen on the book I was still very tempted to read it […]

I really love this book as I always find it gets people talking, even those like my son who are not prolific readers. Glad you enjoyed it. I would recommend you look up on You Tube some of Ray Bradbury’s interviews. He was a fascinating man.