I hadn’t read any Hemingway so when I was offered the opportunity to review the new special edition of A Farewell to Arms I jumped at the chance. Fans of the book will love this new edition – it is beautifully produced, includes photographs of Hemingway’s revisions, and for the first time it brings together all 39 different endings considered by the author.

Unfortunately I discovered that I’m not a Hemingway fan. Some people describe his writing as “sparse”, but I think “wooden” is a more fitting description. It reads more like a poor quality translation than the work of an American Nobel laureate.

She was carrying a thin rattan stick like a toy riding-crop, bound in leather.
“It belonged to a boy who was killed last year.”
“I’m awfully sorry.”
“He was a very nice boy. He was going to marry me and he was killed in the Somme.”
“It was a ghastly show.”
“Were you there?”
“No.”
“I’ve heard about it,” she said. “There’s not really any war of that sort down here. They sent me the little stick. His mother sent it to me. They returned it with his things.”

The central characters were flat and lacked emotion, a problem made worse by the fact this book is about World War I and contained many scenes that should have been disturbing.

Another problem was that the romance was unconvincing. I became so frustrated that I decided to abandon the book, but intrigued as to why it is an enduring classic I decided to read the Wikipedia plot summary. This revealed that the praise seems to revolve around the ending; so I picked up the book again and read the final section. I’ll admit that the ending was poignant and slightly more emotional than the earlier sections, but the writing quality was so poor that I failed to be moved.

This special edition contained 39 different endings, most just a paragraph long. It was interesting to read all the alternate endings and to see Hemmingway’s thought process as he changed things. It was also good to see photographs of the original manuscripts. 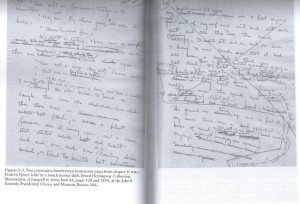 But despite all these wonderful extra features I’m afraid I can’t see why  A Farewell to Arms is an enduring classic. If you’re a fan, please enlighten me!

24 replies on “A Farewell to Arms by Ernest Hemingway”

Interesting post Jackie. I haven’t read this book but was contemplating reading it next year. 39 alternative endings! and wooden! I’ll have to look at it now after reading your opinion of it.:)

Margaret, It always surprises me when classics turn out to be terrible. I’ll be interested to see if you share my opinion on this one.

I’ve never read Hemingway. One of my book clubs read The Sun Also Rises, but I didn’t get to it and I didn’t attend the meeting. I consider you a pretty good judge of things, so it perplexes me because isn’t this one of his best books?

Sandy, It is a shame you missed the meeting as I bet it would have provoked a good discussion. I think this is supposed to be his best book. Just think that shows Hemingway isn’t for me 🙁

I’m not a Hemingway fan either, Jackie. “Wooden” is a great way to describe his prose. Have you seen the Woody Allen film, Midnight in Paris? There’s a Hemingway character in the film who speaks in the style of his writing, which was really funny. Better than his books!

Laura, I haven’t seen ‘Midnight in Paris’ but I’ll try to watch it soon, just so I can laugh at Hemingway’s expense! Thanks for the recommendation!

I’m a Hemingway fan; I love the way what isn’t said in the novels is as powerful as what is. None of his characters admit to the way they feel, but they act on it, and the gap tells a story that punches me in the gut.

Jeanne, It sounds as though you’re much better at filling in the blanks than I am. I struggled because it lacked emotion and because I didn’t understand the characters enough for their actions to seem realistic. It is good to know his writing affected you – reassures me that it is a classic for a reason. 🙂

Jackie, I’ve always liked Hemingway, but I think his understated style and his lack of obvious emotion appeals more to boys: after all we’re just not normally good at talking about that sort of thing. As Jeanne said, to enjoy it you have to be in the mindset of noticing what’s not written as much as what is.

Ross, I can see why it might appeal to men more. I’ve never been a fan of these subtle books * heads off to find something more disturbing to read*

It’s almost impossible for me to put into words how much I disliked reading this book. Shallow maybe, but I am glad to see some similar thinking on this one. The characters may have been purposefully annoying on his part, but I hated them all way too much.

Nicole, I think it is a good sign the characters annoyed you -they were so flat that they just bored me! At least I’m not alone in disliking Hemingway 🙂

I’m with Jeanne on Hemingway. You need to read between the lines, because he doesn’t spell everything out for you. I love his spare prose. He was just all kinds of brilliant at writing stories which have so much going on under the surface.

Violet, It is so lovely to see so many people defending this book! Just shows how different reading tastes can be. Glad you enjoy his books so much.

I don’t have a lot to add to the other comments, but I did want to throw in my two cents.

It’s very true that when you read Hemingway you need to read between the lines, and note that there is a LOT of emotion going on in his male characters, but none of them will admit it or express it. It’s part of what Hemingway thinks makes a man a “man.” But it is reflected in their actions.

Additionally, I think the emptiness you felt (the lack of emotion) in his writing is meant to be a reflection of the way one feels after being part of a war – depressed, wondering what the point of it all is, etc.

I do agree that his writing generally appeals to men more, but as a woman, I feel it sometimes helps me understand the mind of a male. The sparse writing is his statement and rebellion against the flowery and “romantic” prose of other authors.

I also think you might be interested in dipping into another Hemingway story or two, just to see if you like those better. His writing style will be the same, I suppose, but I always try to caution people against shutting out an author completely based on one book. My personal favorite Hemingway book is his memoir, “A Moveable Feast.” It’s a beautiful read, full of descriptions of food, and irresponsible gallivanting around France with F. Scott Fitzgerald. I read it at least once a year.

Anyways, that was my rambling way of saying that I think your feelings and your response to Hemingway are totally valid and understandable, and it’s clear from the comments that you are not alone. I feel differently, of course, but there’s no accounting for taste, as they say. Yay for reading and thought-provoking discussion!

Brooke, Thank you for defending Hemingway! I agree with you about not abandoning an author after one book – I can think of several examples of authors where I have loved one of their books and hated others (Coetzee is a good example) You almost tempt me with your mention of the food in ‘A Moveable Feast’, but I’m still a little bit put off by the fact the writing style is similar. Perhaps I might appreciate him more as I age?

I haven’t read a Hemingway before. Now that you can’t finish this and it has 39 alternative endings I’m thinking I’ll never want to go anywhere near this book!

Jo, The normal book doesn’t have 39 different endings – it is just this special edition that has gathered together all the different options from the author’s note book. If the number of endings intimidates you just pick up a different copy 🙂

Oh dear. I’m ashamed to say I need to yet read my first Hemingway. Poor man isn’t even on my TBR list!!

Ifi, LOL! I have a few very famous authors like that!

Ah – sorry to hear you didn’t finish this one. A Farewell to Arms was the first Hemingway novel I read, and it started me on a Hemingway kick for the next year. I appreciate his spartan prose, and perhaps because this was the first book of his I read, this is my favorite. I don’t know if the movie “The Silver Linings Playbook” is playing in England, but it does include a pretty amusing opinion on “A Farewell to Arms” at the beginning of the movie.

Mome Rath, Yes – ‘The Silver Linings Playbook’ is out here. I plan to watch it when it comes out on DVD (I don’t get out to the cinema much) I’ll keep an eye out for the Hemingway reference. If the one good thing comes out of me reading this it will be that I’ll at least spot that type of mention in future. 🙂

I read a review of this recently and seem to remember the same sorts of issues cropped up. Not at all keen on the dialogue from what you’ve posted, I can appreciate it’s a different style and it would perhaps be interesting for a short while, but after that… I would like to give it a go one day, but doubt it’ll be in a place of importance on the TBR anytime.

This was our WWI read-a-long book at War Through the Generations, and I think I liked it a bit more than others, though I do think Jeanne from Necromancy Never Pays liked it best. I understood the silence and things that were left unsaid were Hemingway’s way of demonstrating male emotion, and the end was a bit of shock given the height of emotion. But it still felt unfinished to me somehow.

I’d be interested to see this edition and the alternatives to see if there could have been something more.