The Republic of Trees is set in France and follows a group of four teenagers as they decide to run away from home and build a life for themselves in the forest.  They create their own “Republic”, surviving by hunting for their own food among the trees.

I loved this first section! I think many children dream of running away and living without adults. This book perfectly captured their emotions – the insecurity and innocence was a joy to read!

Though we never talked about being caught, I could sense our fear in the silences between the words. In the evenings nothing looked the same – the forest became ghostly, insubstantial – and when I closed my eyes at night I worried that it wouldn’t be here the next morning.

As the book progressed it slowly became darker. There was an increasing sense of foreboding and although I had no idea what would happen I knew that it wouldn’t be good.

I found that I enjoyed the book less at it progressed. The beautiful realism of those initial chapters was lost in a series of bizarre events. The actions of the teenagers didn’t seem to make sense and I had no idea what motivated the events that occurred.

Overall I’d say it was a good debut novel, but I recommend starting with one of his other books.

….just didn’t do it for me.  Reading Matters

Not quite as good as The Island at the End of the World, but good all the same. Peachy Books

It’s definitely powerful, and not for everyone. The Literary Amnesiac 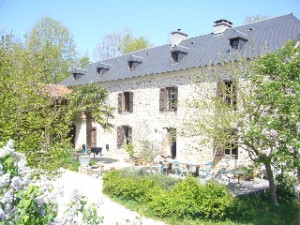 Sam Taylor has recently launched a creative writing course at his beautiful home in Southern France. If I was a writer I’d love to go and make use of his advice while enjoying the great food, wine and scenery of rural France.

If you are an aspiring writer then I recommend looking at his website – I’m sure you’ll be tempted!

Have you read any of Sam Taylor’s books?

Which one did you enjoy the most?

27 replies on “The Republic of Trees – Sam Taylor”

I think that this will be a book that I enjoy (I have a copy of The Amnesiac though so that will probably be read first). Clever way of drawing attention to Sam’s creative writing course.

Claire, I have heard wonderful things about The Amnesiac. I’m looking forward to reading it, but don’t like to read books by the same author too close to each other. I’ll probably read it towards the end of the year, but am looking forward to your thoughts on it.

I haven’t read any of his book. Sorry this one seemed to have petered out.

Beth, It didn’t really peter out – if anything the pace picked up. I just didn’t understand why events took the turn they did and so couldn’t really empathise with the characters any more. I’m sure some people will love it though.

Sam Taylor is a new name for me. I really dislike a story with teenage protagonists and yet this one has such a great title. I’m sorry it wasn’t as satisfying as his previous one for you. I read your other review too and it seems that The Island at the End of the World is more like something I might read to try him. Amnesiac sounds more intriguing to me but, of course, that’s the one my library doesn’t have. Anyway, thanks for the head up on this author – and the links to others thoughts. A great way to do it I think.

Sandra, I often struggle with teenage protagonists – the coming-of-age story has been done so many times that it has to be very well written to interest me. I hope you manage to find one of his other books – I’m sure you’ll enjoy them!

Have to say that the book has limited appeal for me but that writing course has tremendous appeal. Think you just supplied day dreaming material for a few days.

I haven’t read any of his books but I think I’ll start with the one that you loved rather than this one!

Amy, Good idea! I hope you enjoy it!

A writing course in France? Sign me up! Connie May teaches writing courses up in her little piece of heaven in the panhandle, and I’ve thought about it. I’ve not read anything by this author, but I remember your review of Island at the End of the World and I’d love to try some of his books. Nice review!

Sandy, If only I was an aspiring writer I’d be tempted to go to both! I hope you get round to read The Island at the End of the World at some point.

I still have to read An Island at the End of the World… I even have a copy and everything! I started to read it a few months back, but realized it wasn’t the right time (I was having a hard time focusing on anything). I’m so glad you enjoy this author so much – it sounds like he always has some very interesting premises in his books!

Steph, TIATEOTW (The initials are so complicated it doesn’t really make sense to do that!!) does need some concentration in the beginning as you need to get used to the dialect – after a few pages it reads really easily. I hope you find the time to focus soon

Not read anything by Sam Taylor, although I’ve heard amazing things about The Island At The End Of The World, which is probably where I’ll begin my reading adventures with his works.

All said and done though, this book does sound pretty interesting, and I reckon I’d enjoy it. Love the quote.

anothercookiecrumbles, I think you might love The Republic of Trees. The blurb on the back describes it as a cross between Enid Blyton and The Blair Witch Project and for some reason I think this book would be right up your street. I’d love to know what you thought about it. Happy reading!

I have not read any of Sam Taylor’s books…and although he sounds interesting…I am not sure that I will…I noticed The Weight Of Silence in your TBR pile…I read that last summer and could not put it down…it was fabulous.

Patty, I have heard wonderful things about The Weight of Silence – I hope it is as good as everyone says it is

When I was a kid I had exactly that dream- to run away and live in the woods off the land. So the beginning of this sounds great, but then apparently it disintegrates, leaving me feeling iffy about starting it at all…

Jeane, I still think running away to the woods would be a good idea! I love the idea of having to survive using only your own skill – I can dream

I still have The Island at the End of the World on my wishlist….think I’ll wait on that one before I try this one.

Michele, I hope that you enjoy it!

I haven’t read any of his books, but I think I’ll start out with the book you loved.

I hope that you enjoy it!

Hey, thanks for the link! I have read all three of Sam Taylor’s books and I would have to say my favorite was The Amnesiac, although The Island at the End of the World ran a close second. The Republic of Trees was a good read, but (especially by the end) in a kind of horrifying way.

I think it sounds like I liked this slightly more than you did, but I do agree that the first half was stronger. I’m waiting on The Amnesiac comng infrom he library and am looking frward to reading that. It will have to go some to be better than The Island at the end of the world though!

I’d love to take his writing class in rural France too. Beautiful country.