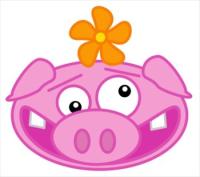 I think I had swine flu this week without even realising it!

I have just been talking to a friend who is a doctor. She was telling me about how her husband has swine flu. He has a slight fever, headaches and aching limbs, but isn’t feeling that bad. I had this earlier in the week! I felt a little bit rough, but took a few paracetamols and battled on, as you always do when you have two children to look after.

Swine flu is a real talking point in our town at the moment, as there have been a quite a few confirmed cases. Everyone is really worried, but like everyone else I assumed it was much more serious than my doctor friend now confirms it is. It is a much milder disease than normal flu at the moment and most people don’t even realise they’ve had it.

I think I must have caught it on my trip into London for Simon and Kim’s Book Group! Have any of you who attended this group also had these symptoms?

It is quite ironic that I was reading my Flu

book when I had it!  I’ll hopefully be able to finish this book over the weekend and tell you all about it!

Is swine flu in your town?

Have you had it? Are you worried?

Oh noes! Hopefully you feel fully recovered soon.
I didn’t catch it at book group but I must admit that I was a little concerned about doing so! It’s been particularly life in London, with even Ronald Weasley coming down with it (I maintain that it’s all a curse by the dastardly Voldermort and his Death Eaters).

I’m fine now – just have a slight sore throat and cough. I wouldn’t worry about catching it now – it is a very mild illness at the moment. You need to worry if it mutates in the Autumn – more about that in my Flu review coming soon!

Oh ho, soemhow Swine flu sounds very scary to me. It could be bcoz we get all these ‘Swine Flu Travel Restricted countries’ mails every other week.
I haven’t heard anyone having Swine Flu in my parts but you never know. Like you people might not even recognize the symptoms.

I hope you feel better soon. Take lots of rest and drink lots of Chicken soup.

It sounds a lot scarier than it really is. It is every where here, so I knew it would happen sooner or later, but I’m almost OK now.

I love drinking chicken soup when I’m ill too!

That stuff is everywhere here in Florida. I really haven’t given it much thought. The media loves to get people worked up into a lather, but it seems generally, unless you are very young, very old or sick with something else, there isn’t much risk. Ever since I’ve gotten back from Poland, I’ve been sniffing and sneezing, and my husband accused me of having the swine flu. I think I’m just allergic to the guinea pig. I laughed when I saw you were reading a book called “Flu”! I hope you don’t feel too poorly. As all of us moms know, you can’t afford to be down and out!

The media really are making a very big thing out of it. As you say it is only a danger if you are suffering from a medical condition or very old/young. I think my boys may have had it too, and they were a bit grumpy, but not too bad. It’s a shame you are allergic to the guinea pig! They are so cute!

My brother’s summer camp is in lock down because seven children have swine flu. It seems to be continuing its trend of manifesting itself in large congregations of children (schools, summer camps) this summer. Oddly, I haven’t heard of any colleges being affected. Just elementary to high schools. I hope that continues to be because I really don’t want to be sick my first year of college.

The school nearest to me has got it, but I don’t know much about other schools in the area. It is bound to sweep through any school it gets in to quite quickly. Children are just packed with germs!!!

Hope you feel better soon. My Mum thinks she had it. We’re hoping my Dad didn’t catch it – man swine flu? Can’t bear to think!

LOL! Man swine flu!! I’m sure they’ll really milk it! Hope you’re mum doesn’t have too much trouble from your dad!

well what can i say?…. my mate has got a 14 month old sister and everyone in her family thought she had it, she was sick , refusing to eat her meals,had diaarieh,and had all symptoms and she wasnt consuming any of her fluids and in the end, ended up looking like an african baby basically skin and bones and she went all weak so anyway the doctor prescribed her with the tamiflu and her mum gave her that but she seemed to be getting worse and worse in the end her mum phoned the hospital but the hospital refused to check her and sent her home so her mum called another hospital they did tests on the baby and found out it wasnt swine flu and the tamiflujust made her much worse because she didnt need it she seems to be getting better now and the doctors still dont no what was wrong with her so im advising people that if the doctor gives you the tamiflu and you end up getting worse then get checked out again for safer precautions.

Poor you, Jackie and glad your nearly better. Any flu is not nice.

It’s all over New York State, too (although we’ve been requested to refer to it as H1N1). Several schools closed for a time in May, but the crisis seems to have passed. It may be that it isn’t as serious a virus as initially suspected. They are still stressing lots of handwashing and urging sick people to stay at home. Glad you’re feeling better!

There was a big discussion over what to call it here too! I’m sticking with swine flu though. It is still very big news here – the first healthy person died in the UK yesterday. Very sad.

How odd not to know for sure. And it drives me nuts (at least here in America) that it was all you heard on the news and then BAM … nothing. It is like it disappeared but it didn’t really … they just stopped going nuts about it. Well, if you had it, I hope you are done with it and feel better.

They are no longer testing people here, so you’ll never know for sure, but 95% of flu going round is swine flu so the odds are high that if you get flu then you’ve had it.

I thought swine flu would be really bad – unable to get out of bed on the verge of heading to hospital etc, so it never even crossed my mind that I’d had it until I spoke to my doctor friend.

I don’t know of any swine flu around us. I’ve really tried not to pay attention to any of the press reports about it, though.

Swine flu is definitely in my town. I think someone has even died from it. So sad.

I hope your symptoms won’t get any worse and you’ll feel all better soon!

Glad to know you’re better. I’m not really scared of swine flu just because I’m aware the ordinary flu is even worse. It’s only that it’s been so publicized and that it’s new.

How scary, hope you’re feeling ok now and that it stays away from you! We don’t have it (yet) where I am, but I’m a worrier by nature so of course I’m worried!

I’m glad to hear you are better. Well, I don’t know if that was the problem I had back in early April or not. Just after I was sick, I heard about confirmed cases in Southern California. I was mildly ill with something (pretty much as you described), but then my immune system went absolutely berserk overreacting to whatever virus I did have and I broke out in a horrid itchy rash over about 85 percent of my body. Was home for 2 1/2 weeks because of the rash. So … swine flu? Who knows.

[…] given the current situation in the world at the moment. Ironically I think I managed to catch swine flu while reading it and I think this added to it’s relevance to […]

Elliot’s been prescribed with tamiflu, but they won’t confirm whether it’s swine flu or not. Symptoms since Sunday, he’s almost all better now. The media have sent everyone into panic mode over something quite minor..

I really hope he gets better soon.

If it is minor then why have healthy people died from this now? I do agree that media have sent everyone into panic mode.

At the moment swine flu is milder than normal seasonal flu. Seasonal flu kills lots of people every year – it just isn’t publicised.

My 14 year old had swine flu with a high fever of 40 degrees for 6 days, got the fever down with Neurofen and Calpol but it went right up after a few hours. She also developed a rash, headache and sickness as well. Very scary.