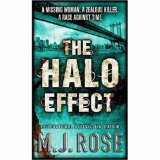 I first heard about M. J. Rose a few weeks ago, when I spotted reviews for her new release The Memorist

It was a very basic thriller. Characters were two dimensional, and followed typical thiller stereotypes. The plot didn’t seem very realistic, and everything was very formulaic. The murder suspects were described one after the other, so there wasn’t much opportunity to guess who was committing the crimes, as each seemed equally likely to have done it.

It was a light read, so was good for me to read when I couldn’t concentrate fully. It was OK, but but nothing special.