Benediction is a quiet novel about ordinary people living in a small town in Colorado. The book focuses on Dad Lewis, a man dying of cancer. It shows how his friends and family cope with this situation and forces the reader to look at life in a slightly different way.

I normally complain about books being too quiet (see my thoughts on Harvest below!) but Haruf has a way of making the most ordinary scenes zing with life. The thoughts of everyone involved are explained with such compassion that it is hard not to become emotionally invested in everything that happens.

She imagined his arrival at home, his wife’s worry and complaint, and his consoling her, joking a little, making his excuses and explanations, and she could see them then in the familiar pretty picture walking arm in arm, looking in at the sleeping children, and entering their own bedroom, lying in bed with her head resting on his shoulder and her hair spread out like a fan, and then she saw him kissing her and doing what he had just done with her, and she realized she was crying again and after a while she got up and went into the old tiled bathroom to rinse her face.

I haven’t read Plainsong or Eventide and that might help to explain why I wasn’t as excited about this book as others have been, but Haruf’s writing impressed me so much that I will be reading all of his books at some point in the future.

Recommended to everyone who enjoys literary fiction.

Harvest is set in a small English village about 250 years ago. It is an atmospheric piece of historical fiction that looks at how a rural community is affected by the arrival of three strangers.

The writing was vivid and wonderful descriptions allow the reader to picture exactly what life was like all those years ago.

He was a pleasant man, I’d say. No more than thirty years of age and dressed much like the master, not for labour but for the open air, in sturdy boots, breeches, a jerkin, and a plain cap without feather, brooch or badge. His beard was shaped and honed to a point with wax, I have a narrow trowel that matches it. A townsman’s beard. A wealthy beard. And he was lop-sided when he moved, with a stiff arm and shoulder on his left

The style was chatty and friendly so it was easy to warm to Walter, the central character. The passionate way the story was narrated also helped to alleviate some of the darkness in the subject matter.

But, despite the many merits of this book, I didn’t fall in love with it. The plot was too meandering and slow and the story was too ordinary to excite me. I finished the book because it was quite short, but it failed to teach me anything new and I don’t think I’ll be rushing to try any of Crace’s other books.

If you enjoy simply being transported to different historical time periods then you’ll love this book, but I prefer plots that are a bit more exciting.

The Spinning Heart by Donal Ryan

The Spinning Heart shows the effect that Ireland’s financial collapse has on a series of ordinary people. Each chapter is narrated by a different character so the reader sees a range of perspectives.

The writing was excellent and the Irish dialect was (to my untrained ears) perfectly deployed.

…the day we buried her I wanted to scream at her to come back, come back, we’ll walk to the shop and I’ll hold your hand and we won’t mind Daddy and I’ll pick a bunch of flowers and leave them on your locker for you and if he calls me a pansy we’ll tell him to feck off and we’ll give back all these years of aging and dying, stupid silence and be Mammy and Bobby again, two great auld pals.

Unfortunately I’m not a fan of short stories. The Spinning Heart is a very short book and I don’t think that a book this length can justify having 21 different narrators. Some characters reappeared, but overall it felt disjointed and am not convinced it can be described as a novel.

If you enjoy short stories then I’m sure you’ll love this book, but it wasn’t for me.

July was a fun month for me. It was dominated by preparations for my youngest son’s 6th birthday party which we did in our garden and our deck that we just finished using materials from Trex decking so it was all ready for this day. He wanted a Star Wars theme and I went a bit overboard by making Jedi robes and light sabers for all 15 children (+ 2 for me and my husband!). I hadn’t done any sewing for 10 years so it was a steep learning curve, but it was worth the effort as they all had a fantastic time. Here is my husband doing some Jedi training in our garden: 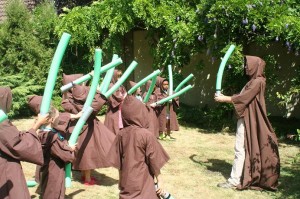 On the book front things were a bit more average. Only Kiss Me First by Lottie Moggach really stood out. Its messages about our online relationships were so relevant to modern society and it raised some interesting questions about suicide. I really hope it becomes the best seller that it deserves to be.

Book of the Month

Kiss Me First by Lottie Moggach

The Angel Maker by Stefan Brijs

We Were the Mulvaneys by Joyce Carol Oates

Death of an Ancient King by Laurent Gaudé

The Reason I Jump by Naoki Higashida

Did not finish: Ghana Must Go by Taiye Selasi, The Childhood of Jesus Christ by JM Coetzee, TransAtlantic by Colum McCann

August will follow two distinct themes for me: Bookers and Icelandic fiction. I plan to try as many of the Booker longlist as I can get my hands on, but priority will be given to Icelandic fiction, which I will read almost exclusively during my two week trip around the country. I hope to read most of these books:

Fish Can Sing by Halldor Laxness

The Sorrow of Angels by Jón Kalman Stefánsson

Names for the Sea by Sarah Moss

The Atom Station by Halldor Laxness

And the Mountains Echoed by Khaled Hosseini

The View on the Way Down by Rebecca Wait

The Flamethrowers by Rachel Kushner

A Man In Love by Karl Ove Knausgaard

Blog posting may be sporadic over the next few weeks as I will be spending a lot of time with my boys. We have some fun days out planned, several nights away, and our holiday to Iceland. I’ll try to schedule some posts in advance, but be prepared for a few quiet spells.

I hope you have a wonderful August!